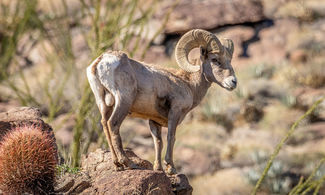 A significant citizen science project is underway at press time as nearly 100 volunteers spread out to some of Anza-Borrego's most remote places for the annual census of desert bighorn sheep.

The annual count provides wildlife managers with valuable information about the health, number, habitat conditions, movements and potential threats to these magnificent animals that occupy a narrow band along the western edge of the state park.

Volunteers must undergo training to be able to identify age and sex of the sheep in addition to their health.

The annual count is conducted to the heat of summer when water becomes scarcer. The volunteer counters will set up observation posts at about 20 locations where sheep can find water during summer months.

Some of the count locations can be reached by car, but others require counters to hike in. Some locations are remote enough that sheep counters will stay there the whole time.

A significant observation last year was the return of sheep to a very remote spring in the Santa Rosa Mountains that was dry in 2017. A total of 35 sheep were seen there.

One group of counters hiked four miles to the Fourth Grove in upper Palm Canyon last year where they experienced temperatures of 102 degrees, along with scorpions and a rattlesnake encounter.

The information that volunteers have collected during the 49 years of the count is invaluable.

The continued annual census indicated a general increase in sheep numbers. This is good news after sheep numbers plunged in the mid 1990's. Today sheep numbers are estimated at around 1,000 throughout the range that extends from Mexico to Mt. San Jacinto in Riverside County.

The Borrego Sun will report on the final count numbers once all of the information has been compiled.