Julian Celebrates the Fourth in Style 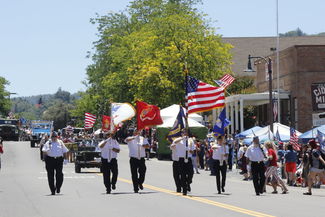 Once again, the community of Julian came together to celebrate the nation's birthday in style.

With close to 70 entries this year, patriotism was alive in the small historic town of Julian. The weather was perfect and the gentle breeze helped to cool off the hundreds of visitors that came to see the event. It was a day filled with fun and a well-orchestrated parade and festivities.

What is said to be the "best little small-town parade in America," this year's theme for the parade was "Historic Julian Celebrates the Fourth," and the Grand Marshal was the Julian Historical Society.

Two weeks before the holiday, businesses along Main Street were decorated with festive bunting and flags. More flags were added a week later, and the town of Julian became increasingly more excited for the holiday.

The celebration commemorated the Nation's birthday, and saluted the men and women who have served to make our country great, both domestically and abroad.

Visitors lined up on both sides of the parade route down Main Street early Thursday morning, while many even set out as early as 6 a.m. the day before. The sidewalks began to fill with enthusiastic parade viewers in their best spirited attire celebrating the day in Julian.

The parade festivities began at 10 a.m. with the first vintage aircraft flyover for the day.

One of the most exciting parts of the day, the four planes make several passes across Julian to everyone's delight, a sure crowd favorite, nothing short of disappointing. Shortly after, Julian's Doves and Desperados, a local reenactment group, performed a gunfight skit near the main stage.

Merchants of the Year, Misty and Fred Dornan of Miner's Diner and Miss Julian Nicole Arias made brief statements to the crowd.

The Navy-Marine Corps Relief Society rendered flag honors and Chance Perez performed the "Star Spangled Banner" as a huge United States flag was carried down the parade route. A second vintage aircraft flyover marked the start of the parade. Then was followed by the presentation of colors by the American Legion Post 468 color guard, beginning the procession down Main Street.

Entrants to the parade had the option to be judged in one of the competition categories. This year's winners were: Gold Youth Arts Organization for Most Musical and Julian Carriage Company for Best Equestrian entry.

Regulars Wanted Beanery received the Best Vintage/Auto award for their vintage truck while Julian Zumba Fitness won the Most Humorous category for their excitement and exuberant participation.

The San Diego Base United States Submarine Veterans stood out as the Most Patriotic for their service to our country.

The award for the Best Youth category went to Julian Pathways Inc., and the Open category award was given to The Punkin' Project for their innovative design.

Following the parade, many packed up their chairs and headed off to explore the little town of Julian, while others went to the American Legion 468. There, they hosted its annual deep-pit barbecue and dance, which showed to be yet again another hit. All enjoyed their delicious lunch after the festivities, while listening to toe-tapping rhythms by the band.

If you missed this year's parade, be sure to come up for the parade next year, as it's an event you surely don't want to miss. The event is always fun for the whole family. It also ends early enough to allow visitors to go to other towns for firework displays or enjoy the American Legion barbecue.