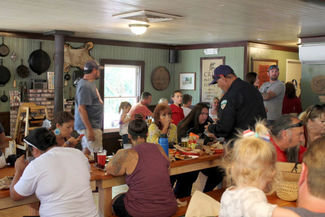 The Julian Beer Company opened its doors for business a year ago on July 4.

After the annual Julian Parade, if many didn't wander to the American Legion Deep Pit BBQ, or explore the beautiful little town of Julian, many headed over to the Julian Beer Company, where they celebrated its one year anniversary, and consisted of a full day and evening of wall-to-wall customers.

From noon to 6 p.m., more than 400 people gathered, enjoying the delicious food, drinks and listening to the various live musicians. There were seven different musicians from the San Diego area.

With Troy Sandow, Billy Watson, and James Harmon sharing lead harmonica playing, backed up with drums, bass guitar, and lead guitar all jamming and making some great music that was enjoyed by all.

By the end of the day, compared to their opening day, the Julian Beer Company made over $3,000 in sales.

What was there before had been closed for several years (formerly Bailey's), and the owners spent over a year refurbishing the several buildings located on the property. And what a job they did!

From its opening day, it has been going like gang busters, thanks to great management, great help, great food, and making their own unique variety of beer.

They now have 21 taps of different beers, up from 18 taps when they opened, and have a crew of 20 people keeping everything running.

Julian Beer Co. also has a menu that is out of this world that includes pizza, ribs, salads, and a whole lot more that is all good to eat.

This place is family and pet friendly, with live music on the weekends.