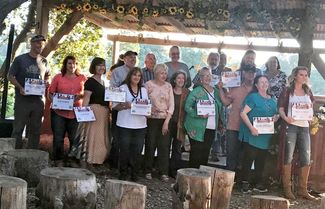 This year's Merchant's Picnic was held at the Julian Farm and Orchard in Wynola. The beautiful venue showcased all that Julian has to offer: a wonderfully rural setting surrounded by the simplicity of nature. The gathering at the picnic included members of businesses, local organizations and groups.

The Julian Chamber of Commerce President, Tom Nickel of Nickel Beer Company, started the festivities off by addressing the crowd. Newly elected Nickel thanked the Chamber's previous President, Jim Wayman, and other members of the Chamber for their support and hard work.

Dana Pettersen was given the Volunteer of the Year award for her tireless work with a number of organizations throughout the years to include the Julian Fourth of July Parade, Julian Community Heritage Foundation, Julian Chamber of Commerce, Julian High School Booster Club, Friends of the Julian Library, Miss Julian Pageant and many more. Pettersen was regarded by the entire crowd as an integral part of Julian. Pettersen was not present to receive her award however, a video of the event and the crowd's cheers was sent to her.

The recipient of the 2019 Merchant of the Year was awarded to the Julian Beer Company. Julian Beer Company opened its doors on July 4, 2018. Since then, the establishment has garnered a large collection of regular local patrons and many new visitors each weekend. JBC, as the restaurant and brewery is affectionately called, has created a fun and inviting atmosphere.