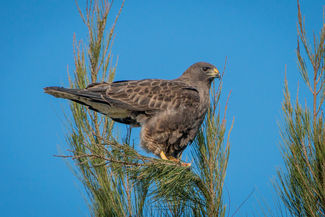 Hawk Watch 2019 is over, but once again the dedicated band of volunteers who observe and record passage of migrating Swainson's Hawks each spring were rewarded by the spectacular show of nature on the move.

Borrego resident Hal Cohen, the sparkplug behind the annual Swainson's Hawkwatch called this year's effort "a strange but wonderful season."

He launched the annual spring census 17 years ago when it became known that Borrego was an important waystation for one of the longest animal migrations in the world.

Swainson's travel from as far as the southern regions of South America to the northern arctic.

The official Borrego count ended on March 31 with a total of only 1,086 birds recorded. This was the lowest number in the 17-year his- tory of Hawkwatch.

"The official count was ridiculously low, but the number of hawks was grand," Cohen said.

"Expectations for a banner hawk season ignited sleepless nights for us hawk watchers," Cohen said. Hopes were high that the spring 2019 migration would be even bet- ter than 2017 when hundreds of birds were recorded daily and more than 3,000 were seen on a single day.

The flowers and caterpillars did not disappoint, but the hawks apparently didn't get the memo.

Again, the birds apparently failed to note the Hawkwatch schedule.

After the count officially ended, large numbers of hawks began showing up. It began on April 4 when several hundred Swainson's were sighted in Borrego Valley.

Apparently, the massive wildflower season and the millions of White- lined Sphinx Moth caterpillars throughout Southern California and Mexico slowed this year's migration down. The hawks were just too busy eating.

The birds arrived in Borrego, but just a few days after the official count season.

To conserve energy, the roosting birds wait for warm currents to begin rising from the desert floor. They then launch in the thermal currents, circling and until they catch a wind current that will carry them north.

As they launch, the birds often gather into circulating formations known as Kettles. Sometimes these kettles can grow to nearly 1,000 birds in what some call a hawk tornado.

The official bird count happens in the morning from around 8 to 11 a.m., but observers are also out most evening to note where arriving birds are roosting for the night. This makes counting easier when the morning flight begins.

The Hawkwatch site is located 2.8 miles north on Palm Canyon

Drive on DiGiorigio Road and guests are welcome.

Photos of Swainson's hawks and information on past counts can be found at Borregohawkwatch. blogspot.com and other North American watches at Hawkcount. org.