Culinary Delights are Highlighted in Julian 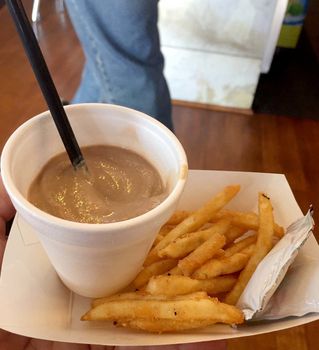 Just one of the many events sponsored by the Julian Chamber of Commerce, the Taste of Julian was a great experience. Not only do many of the businesses get the chance to showcase a taste of their menu, it is also an opportunity for visitors to learn all about what Julian has to offer.

Visitors had the opportunity to go on a self-guided tour through Julian visiting 20 businesses during the annual event, May 18.

The Taste of Julian was the perfect opportunity for these new businesses to really shine. Julian Beer Company provided a sample of their craft beer along with Cheesy Bites. Heroes Restaurant served their Apple-Cranberry-Almond Coleslaw with a small Pulled Pork Sandwich. The Cooler offered a tasting of their beer while Regulars Wanted exhibited their Vegan Peanut Butter Cookies and organic coffee.

Some of the highlights during the tour included a chocolate milk shake and fries from Miner's Diner and piping hot tea at the Julian Tea.

Jeremy's on the Hill Famous Brussel Sprouts are always a winner too. Julian Grille offered their Georgia Peach Chicken, Pasta Primavera and the Sweet Walnut Salad. With apple pies being crowd pleasers in Julian, the Julian Pie Company, Apple Alley and Mom's Pie Shop really shined. After all of the wonderful tastings, it was hard to imagine anyone still being hungry at the end of the day.

The Julian Chamber of Commerce advertised the event as "A Rural Dining Adventure".

With the perfect weather and beautiful scenery, the Taste of Julian was definitely an adventure not to miss. Be sure to visit the Chamber's website, visitjulian.com for upcoming events and other opportunities to explore Julian.