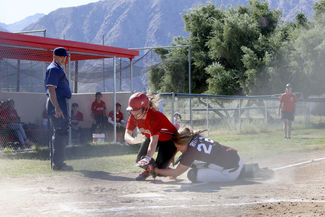 With a solid performance on the mound, backed up by offensive support, the Lady Rams defeated crosstown rival Julian Eagles May 1, 12 – 1.

Freshman pitcher Brianna Del Bono pitched a dime with eight strikeouts, holding the Lady Eagles to just one hit and one run.

In their first meeting last month, the Lady Eagles defeated the Lady Rams 23 – 6 in five innings.

The Lady Rams were also on the road for two games against West Shores and Calipatria.

The team defeated West Shores for the second time this season, 24 –3, but fell short against Calipatria 7 – 2.

In the game against the Lady Eagles, Del Bono allowed a walk to begin the first inning, and after an RBI single by senior pitcher Kyla Blanco, put Julian up, 1 – 0.

This would be the only run and hit by the Lady Eagles allowed by Del Bono.

The Lady Rams came right back in the bottom of the first inning.

Despite giving up that hit and ruin in the first, Del Bono found her groove, as she worked consecutive 1-2-3 innings, cruising through the second up to the fifth inning.

Meanwhile, the offense backed her up, providing run support.

The Lady Rams added a run in the second and more in the third.

In the bottom of the third, Sanchez started the scoring with a leadoff single. Manzano hit a RBI double, then eventually stole home, extending the lead, 5 – 1.

Rodarte kept the hits going with a liner down second base for a single.

Junior first baseman Delaney Barclay took advantage of her hit down right field, and turned on the wheels, as she was waved home. Barclay held no mercy, and dove for home plate, attempting to dodge past or even over the Lady Eagles catcher. It was quite the collision, but both were OK.

The team added two more runs in the fourth, courtesy of Sanchez and Manzano.

A pitching change put freshman Alivia Perry at the mound for the Lady Eagles, who held the Lady Rams scoreless in the fifth inning.

It seemed like the Lady Eagles were starting to rally in the top of the sixth inning, putting Del Bono in a jam.

Bases were loaded with two outs, but Del Bono did what she has done throughout the game, and got the batter looking, avoiding any type of comeback.

Del Bono cruised through six innings, with eight strikeouts and allowed only one run.

Back-to-back walks were issued to leadoff the inning, and Manzano sent everyone home with a three-run inside the park home run, 12 – 1. Game over.

The Lady Rams last game and home game of the regular season was against Vincent Memorial. The team won by forfeit, 1 – 0.

Borrego finishes in fourth place in the Manzanita softball standings.