Starr Shines Bright for the Wikipedia of Borrego 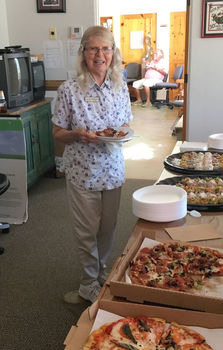 Volunteers are at the heart of the Borrego community, and no volunteer exemplifies the selfless dedication to duty more than the Chamber of Commerce's Starr Hutchinson, a 19-year resident from Ocotillo Wells.

When once asked which Borrego Days Festival volunteer committee she would like to sit on, Starr responded, "All of them." And she did.

But those volunteering days, 14 years actually that began at the Chamber, have come to an end.

Starr also volunteered at the Park and the Borrego Springs Performing Arts Center, where she was known as "The Wikipedia of Borrego."

At a Going Away reception on April 30 at the Chamber of Commerce & Visitors' Bureau, friends, supporters and folks from around the community, plus members of the Chamber's Board of Directors, were all there for the send-off of Starr and her cat Lexi, to her new homestead in Grand Junction, Colorado.

A few accolades from those who know her well:

"Volunteers give the most precious gift, their time," Fred Jee said.

Former Chamber Executive Director Linda Haddock: "Starr was the first woman volunteer to be stationed in Europe with the Red Cross, and she knows everything about everything here in Borrego."

But she also has a command of the English language, Haddock added, with proper spelling and syntax needed for proofreading documents. Haddock then directed her comment to Starr, "You are going to be so missed."

Starr was only too happy to share her knowledge with visitors to the Chamber, and she says, "It's the people I've met – so many different people from so many places around the world – that's what I'll remember," she said.

And very soon, no doubt, Starr Hutchinson will be found volunteering for something, maybe everything, in Grand Junction.