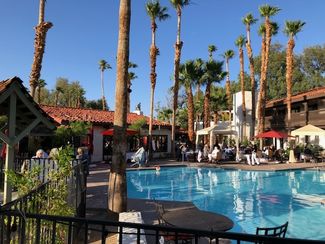 As the sun dropped over the San Jacinto's for the last Sundowner of the season at La Casa del Zorro, so did the temperature. Last year at this time in the late-afternoon, and also back in 2016, we would have been looking at temps in the mid-to low-80's; this year, however, it was down to, and even below (prior to crowd dispersal) what we native Southern Californians refer to as parka-adjacent – 70 degrees!

Are we complaining? Heck, no. It was a another beautiful Spring day in Borrego, and everyone was celebrating the end of a successful season in gorgeous weather.

But that wasn't the highlight of the evening. Fish tacos courtesy of the magnificent LCDZ staff, with General Manager Patrick Sampson at the helm, and replete with rice, beans, and toppings.

Izon Eden, a familiar duo at these events, rocked again, Patty blessing the crowd with her stylings, and Dayton rocking the house on vocals and guitar.

Sundowner Chairman Brad Tidwell welcomed the large crowd with his usual charm and enthusiasm. He was followed by LCDZ Sales Manager Kasey Simrock talking up the Grand Prize of the evening – a weekend for two at LCDZ.

Miss Borrego Dennise Cecena sang a Capella, covering a tune by the artist "H.E.R." Fred Jee announced a special event during the Borrego Film Festival – a live orchestra to accompany a silent film about Joan of Arc, so be sure to get your tickets early.

Chamber Executive Director Valeen Szabo gave kudos to our community volunteers, and also calmed our collective nerves with mention of a scaled-down version of the 2019 Borrego Days Parade & Festival. As a former Disneyland parade organizer, she convinced us we're in good hands with her at the helm.

But the apex of the evening was to come later. Cecena sang another song by H.E.R., and Carol Brandin picked the winning ticket for a pool lounger. The spray bottle of mosquito repellant/sunblock went on the block, which was won at the April Sundowner but left behind; it didn't have a single ticket in the jar this month. Instead of returning it to its rightful owner, Tidwell will instead let that can wither in the forthcoming heat of summer and try again next season to give it away.

Now we come to the highlight of the evening. Yes, it's all about the fudge. For five years, Borrego Sun reporter Michael Sadler had been trying to win that little block of brown goodness, dropping at least two tickets in the cup each month, for eight months per season. Trying to win it has cost him about 80 bucks so far.

But it's the principle that matters. Tidwell called him up for his last gasp attempt of the season, and Cecena drew the number, calling it out. Sadler searched the crowd, and only one hand was raised – Wendy Quinn, seated next to him and watching over his tickets. "You won!" she shouted. Sadler went into shock, followed by the joy of knowing he could now die a happy man.

Quinn loaned him the money to buy five raffle tickets when they arrived at LCDZ, plus wine for the both of them. So when she announced he was the fudge winner, it was a no-brainer that he would have to share it with her if only to later increase their caloric intake to overcome the chilling weather.

Then came the Grand Prize. Joe Tatusko and Maureen Kirby had already won a dinner for two at La Casa, so when they also won the Grand Prize, it was up to Maureen to pick the date, and she chose her birthday in July.

Finally, the 50 – 50 raffle was won by Patty Wacks. The amount will remain a secret because one never knows when the IRS is lurking about and taking notes!

And so ended the final Sundowner of the season.