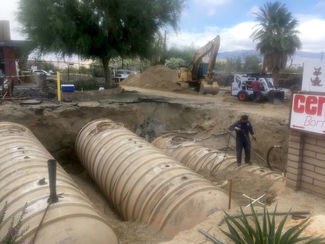 Anyone attempting to enter the eastern driveway to the Center complex knows by now they need to take a detour. Otherwise, they are confronted with a 40x40x8-ft deep hole, where a Bobcat excavator and workers with shovels have been hard at work.

By Memorial Day weekend, the bulk of the work should be done, and within a month expect to see a new look at that entrance: Improved access, grade adjustment, sidewalks with landscaping, noise abatement, realignment of parking and driveway space, and even a marketing sign for the Performing Arts Center.

"We mobilized on May 12, and begun excavation the next day," Jim Wermers, The Mall and Center owner, said.

The four underground tanks, at 10,000 gallons capacity each for diesel and three grades of gasoline, were exposed and then removed by crane last week. This left the tanks exposed, but before they could be removed, the tanks were flushed and emptied into a truck designed for such purposes.

Also prior to tank removal, the surrounding soils needed testing for contaminants. "The tests came back negative," Wermers said, paving the way for refilling, compaction, and an asphalt covering; the fuel tanks were removed by crane and the fill-in process begun.

Wermers has been planning the project for months, but now that the season is coming to an end, and prior to the hot weather surely to follow, "It was time to get on it," he said.

With gas stations at both the western and eastern reaches of Borrego, we will not miss this third source of fuel.

We will, however, look forward to a brand new look as we turn into the Center.

Meanwhile, the excavation will be completed by the start of Memorial Day weekend, and it will take about a month for Tom Fredericks and Co. and others to complete the remaining construction and beautification tasks.