Solid Victory for the Lady Rams in League 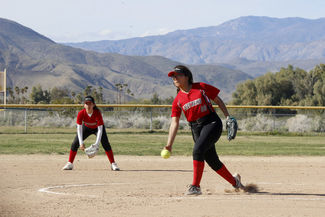 The solidness at the plate was surely nice, as the Lady Rams put up 10 runs in the first inning and went through the lineup twice in two consecutive innings. This provided a good cushion to back up the pitching of sophomore Daniela Carmona, who was given the nod to start on the mound.

The team also defeated Warner Springs 15 – 4 at home, and knocked in a 26 – 8 win on the road over Hamilton High, extending their win streak to three.

Against West Shores, the Lady Wildcats threatened early in the top of the first inning.

After a flyout to the shortstop, the Lady Wildcats hit a single and worked back-to-back walks to load the bases. But the Lady Rams infield defense prevented the runs, stranding the bases.

Up at the plate for the Lady Rams in the bottom of the first inning, junior second baseman Cristina Arias and sophomore shortstop Marla Manzano worked the count for walks to start the inning.

Arias stole second, third and eventually home to get the Lady Rams on the board, 1 – 0.

Senior catcher Vanessa Rodarte added to the board with a hit for a single down left field to bring in a run, 2 – 0.

As a team, the Lady Rams were a home run shy for the cycle in the inning, and the game.

The runs did not stop there, as back-to-back singles and walks helped load the bases multiple times, and the hits seemed contagious. After going through the lineup, the Lady Rams knocked in 10 runs, just in the first inning.

The Lady Wildcats didn't bring anything home in the second inning, while the Lady Rams picked up right where they left off.

The team once again had the bases loaded twice, capitalizing on the Lady Wildcats mishandles and gaps in the infield. Hit-after-hit, the Lady Rams added to the board.

The Lady Wildcats found some life in the top of the third, attempting a comeback.

Carmona got an out at first base, but then allowed back-to-back walks. Then allowed a single, her first hit since the first inning, which brought home a run.

The Lady Rams brought in three more runs in the bottom of the fourth.

Despite a couple of singles in the top of the fifth, the Lady Rams infield's defense did not allow any more runs, ending the game in a mercy rule.

Almost every player on the Lady Rams lineup had a hit, except for one, who walked all four times.

The team faced Warner Springs again in an away game, which took place after print.

The Lady Rams are back on the field at home against Calipatria in another league matchup Friday April 5, 3:30 p.m.