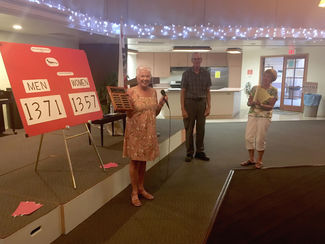 As with assessing criminal suspects, the men playing in the annual RoadRunner Club's final tournament of the season, the Duel in the Desert, had the means, motive, and opportunity to come out on top. But we failed. Again. This time by "only" 14 strokes. It's been worse.

A pattern of losing to the fairer sex is clearly becoming a statistically significant trend for this annual event, and only the men can stop it.

In a field of 53 players in foursomes (and several threesomes with a blind draw), six ladies shot under par (after handicap), plus one at par. For the men, four went under par and two shot par. Low individual net for the men went to Leon Fuhrman and Bruce Kelley, both at 52, but two three ladies bested them soundly, with Linda McBride shooting lights out at 48, Sharen Frazier at 49 and Betty Bordis at 50.

The men were indeed anxious throughout the awards dinner, a harbinger of things to come. While we talked trash, the ladies were waiting patiently to toss us into the recycling bin. Oh, there were chip-in wins and closest to the pin wins for the men, but those were ancillary to the main goal.

When the ladies were announced the winners, a shot captured Men's Golf president Bruce Kelley seemingly happy. It was all for show. And while he didn't come right out and admonish the men for our abject failure, he was clearly disappointed in our overall play.

The two men in the winning foursome at 11-under par at least had something to smile about. Roger Serwold, Linda McBride, Phyllis Slade, and Bruce Kelly played a fine game. And McBride and Slade were only too happy to look down their noses at the men in the second place team, my team, at our 6-stroke deficit. I shot a woeful 56, despite practicing my putting while sleep golfing where I made every putt. Just not against the ladies in the real game. It was made all the more painful when our team's blind draw was Linda McBride, the tournament low net. We still couldn't win!

We men had hope, but hope is not a successful strategy. "It's not a game of life or death out there," someone said prior to the match. "It IS life or death!"

Yes, we men died a slow and painful death out there on the course, but we maintain our collective hope that next year, or perhaps the year after that, the men will actually put in some practice time and start to even up the score.