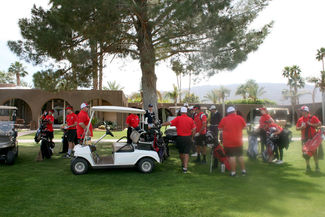 In the match on April 14 against Vincent Memorial, the Rams scored a technical forfeit, as not enough opposing players showed up for minimum scoring. But at least our Rams (and the Lady Rams, too) got in a some work on the tees, fairways, and greens.

The Rams have won four games by forfeit, but as they say, a win's a win. There might be a couple of make-up matches against one or two teams over Spring Break, but those are iffy at best. Scheduling and organizing anything when kids are out of school, perhaps traveling with parents, can be logistically difficult.

Either way, however, eyes of players and coaches alike are coming into laser-focus for the Finals on May 2 at the Borrego Springs Resort.

Previous opponent forfeitures aside, it's going to be a match to watch as the Rams try to hold on to their #1 League standing.