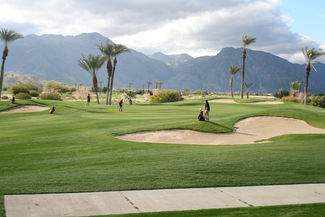 While the boys golf team is far behind 2019 overall CIF leader La Costa Canyon, they are, at this writing on March 13, on the winning side at 3 – 1 overall and 1 – 1 in Citrus League play. And what players and head coach Tim White and his assistant coaches Mitch Mossay and Paul Taylor are all aiming for is the chance to compete in the Citrus Golf Finals April 2 to be held on their home course, the Borrego Springs Resort.

After all, on any given day, golfers who can put aside the pressure of competition can have a great day out on the course, be they amateurs, professionals, and even high schoolers. Same goes for a team. Because golf is as much, if not more a mental game that purely physical, mental discipline during a big match is a must on the tee box, out on the fairway, and especially on the green.

Good players, and their team as a whole, do choke sometimes, leaving room for Rams players to see the opportunity, step up, and headbutt their way into playing a great match in the Finals.

And that's not just wishful thinking. Six of the seven players listed on the team roster went the customary nine holes in an away game against Citrus League leader Vincent Memorial on the afternoon of March 11. While the Rams lost, and by quite a large margin, the drop in virtually all individual strokes over five matches showed the Rams players, and thus the team as a whole, demonstrating pretty dramatic improvement. That's a hopeful factor with eyes on the prize at the Finals, at this writing still 11 matches away. As they say, anything can happen.