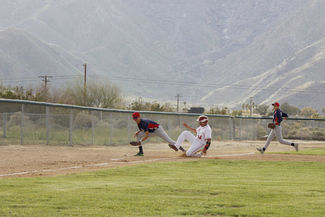 The Borrego Springs Rams baseball team is swinging into the 2018 – 19 season with a new groove and improved groove, and new goals, under the leadership of new head coach Will Hobbs.

With high hopes, the team is looking toward a winning season, and the chance to compete for a league championship.

"I'd like to establish the foundation for a program that the community will be proud to support," head coach Will Hobbs said. "Our focus and expectations aren't simply on winning this year, it's about developing a solid program, more than anything. Hopefully, for years to come."

After a 12 – 3 loss to Calvary Christian Academy to open the season, the Rams bounced back with three consecutive wins. The team hit it big with wins over St. Joseph Academy (15 – 4) and Ocean View Christian (18 – 6), and a clutch-hit single win over Calvin Christian (3 – 2). It is to note that the team opened their season last year against Calvin Christian, who shut the Rams out 14 – 0.

However, their three-game win streak was broken by Escondido Charter, 16 – 8.

"Unfortunately, we didn't have our pitchers available due to the close game we had prior against Calvin Christian," Hobbs said.

The Rams went on to face High Tech San Diego, which ended in a 10 – 10 tie, followed by a forefit to Mountain Empire.

Against Ocean View Christian, the Rams, who managed to take advantage of early mistakes and better swing control, were on the board first.

After loading up the bases, a walk brought in a run.

Senior center fielder Francisco Morales hit a single through the gap past the shortstop, bringing in two runs, 3 – 0.

Freshman pitcher Daniel Arias followed his lead with a single of his own to bring in two more runs home, extending the score, 5 – 0.

After surrendering three runs to Ocean View in the top of the second inning, Borrego went into overdrive at the plate in the bottom of the inning, going through the lineup.

Seniors second baseman Fernando Alcaraz and shortstop Juan Carmona started the inning off with an extra base hit and a walk, respectively.

Sophomore first baseman Gabe Milyard and Arias both singled to bring in a run a piece.

The Rams managed to put their opposing pitcher to work, producing walks to bring in runs. Then with the bases loaded, once again, Vilchez found a weak spot, bringing in another pair of runs. The Rams were up 13 – 3.

After a pitching change with Carmona on the mound in the third inning, he put the middle lineup away with consecutive strikeouts for a 1-2-3 inning.

"(Daniel) Arias, our freshman pitcher came in, did his job, and was exellent for us on the mound," Hobbs said.

The Rams' bats were still hot bringing in three more runs in the bottom of the third inning.

The Patriots of Ocean View found a bit of their momentum, drawing consecutive walks to load the bases and bring in three runs. With flyouts to the outfield, ending the inning, Rams were still up 14 – 6.

The Rams brought in four more runs in the fourth and fifth innings.

Milyard made his appearance on the mound to close the game out, preventing more runs coming in, and with the mercy rule in effect, the Rams won in six.

"In this game, we gave a lot of kids the opportunity to pitch who haven't pitched before, and they stepped up to the plate, did an excellent job," Hobbs said.

"(Francisco Morales had a big bat today, and (Ulices) Vilchez did an excellent job with his first start behind the plate," Hobbs said.

Heading into the Crusader Tournament, Hobbs said the mindset was to get better every game, and hope to have a great regular season.

Against Calvin Christian a week later, commanding pitching performances from freshman Cesar Ochoa and Carmona helped lead the team, along with timely hitting by Alcaraz and Vilchez. Morales came in clutch knocking a single to bring in the winning run, and Carmona closed the door in the seventh to seal the game.

The team hoped to carry their winning momentum against Escondido Charter later that week, but were sadly, out hit.

"Despite falling behind by a six-run deficit in the first, we fought hard to try and get back into it," Hobbs said.

Arias knocked in a hard line drive to right field to knock two runs across late in the game, but it wasn't enough.

The Rams managed to load the bases three times, but could not capitalize on the opportunities.

Morales went in for relief, shutting down their potent offense, but damage was done early, proving to be insurmountable.

Despite all the victories the Rams managed to earn, Hobbs said there is still a lot to work on, while keeping high expectations for his young team.

Some things to work on as a team, Hobbs stated, was to get better at base running and better discipline at the plate.

He pointed out some weaknesses, and hopes they are able to capitalize better on them.