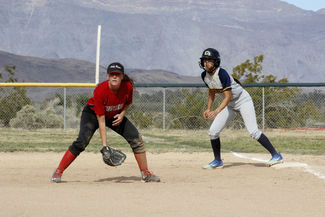 Despite cutting the deficit to three in an attempted comeback, the Lady Rams softball team could not stop the hot hitting bats of the Calipatria Lady Hornets, putting an end to their win streak April 5. The Lady Rams fell, 19 – 9.

The team also faced Mountain Empire in hopes to bounce back, but lost 28 – 4.

The Lady Hornets of Calipatria were on the board first in the top of the second inning, after Borrego starting pitcher freshman Brianna Del Bono gave up a leadoff triple. A RBI single, cashing in the runner at third, 1 – 0.

Del Bono managed to strike out two, but allowed a walk and a single, loading up the bases with two outs for pitcher senior Delaney Hernandez.

Helping herself with run insurance, Hernandez hit an inside-the-park home run down center field for a grand slam, as the Lady Hornets extended their lead to 5 – 0.

The Lady Rams managed to get a run back in the bottom of the second inning. Del Bono hit a leadoff single, and junior first baseman Delaney Barclay hit a line drive down right field to bring her in, 5 – 1.

However, the Lady Hornets extended their lead in the top of the third and fourth innings, with an RBI single and back-to-back home runs to lead 8 – 1.

In the bottom of the fourth inning, the Lady Rams got two more runs, after senior catcher Vanessa Rodarte hit a leadoff single to begin the inning. Barclay then hit for an RBI double, still trailing 8 – 2.

The Lady Rams began to chip away at their deficit, finding some life and momentum in the bottom of the fifth inning.

In what seemed to look like an easy inning for Calipatria, getting the first two batters out, the Lady Rams did not go down without a fight.

Junior second baseman Cristina Arias was able to work the count for a walk, and sophomore shortstop Marla Manzano hit a single down left field. With two on base, Rodarte found the right pitch, hitting to deep center for a three-run inside-the-park home run, 9 – 5.

She finished the game with three hits and four RBIs.

Del Bono followed with a triple, and Barclay hit an RBI triple, 9 – 6.

Del Bono had three strikeouts, pitching all seven innings for the Lady Rams. Barclay finished the game with three hits and four RBIs.

The Lady Hornets did not let the Lady Rams get any closer than that, and extended their lead in the sixth and seventh inning, scoring 10 runs, and led 19 – 6.

The Lady Rams could not get enough runs, only scoring three more in the bottom of the seventh inning, as they lost 19 – 9.

The team is back in action 3 p.m. Wednesday April 24 at Vincent Memorial.