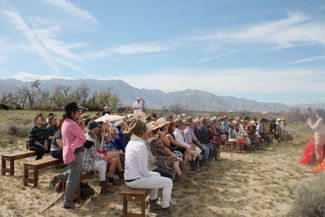 Storm Garner and John Wang were married outside of Old Borego Saturday March 23, with family and guests numbered around 115 people in attendance. This was the first wedding that I know of that has ever taken place at Old Borego, where I grew up years ago.

Father of the Bride William Garner, his wife Wendy, his brother Tommy Garner, his wife Carolyn, and their father Fleetwood Garner purchased Old Borego in the early 80's. David and Lucy Wang, father and mother of the groom John Wang were among the honored guests.

Wedding vows were given by a friend of the bride Susan Wang officiated through California's deputy marriage commissioner for a day program.

Younger brother Solomon and his wife Jamie of Austin, Texas with his older brother Paul of Dallas, Texas were in attendance also.

Groom John lives in New York City, and operates the Queens International Night Market in Flushing Meadows Corona Park. He was previously a corporate lawyer with Simpson Thacher & Bartlett, the Manhattan law firm. He holds three undergraduate degrees from the University of Michigan – a bachelor of arts in philosophy and two Bachelor of Science degrees, one in cognitive science and the other in mathematical physics. He also received an MBA and law degree from Yale.

Bride Storm is studying for a master's degree in oral history at Columbia, where she graduated with a bachelor's degree in creative writing. She was the costume and production designer for the narrative feature film "South Mountain'' by Hilary Brougher, which premiered March 11 at the South by Southwest film festival in Austin.

This wedding was a beautiful blend of two cultures that have joined together under the watchful and caring eye of Chief-Rain-In-The-Face.