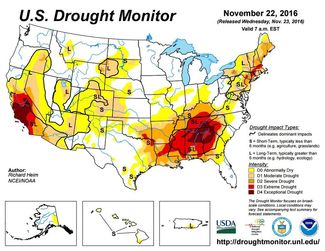 In mid-March of 2019, the NOAA-affiliated National Drought Mitigation Center announced the official end of California's 376-week Drought – that's over seven years worth. Winter storms pushed the Sierra snowpack "well above 100%" this snow/rainy season, according to the Center.

Since Dec. 2011, the State has suffered under a lack of annual rainfall, with the five years between Jan. 2012 and the Summer of 2016 particularly hard-hitting.

Former California Governor Jerry Brown lifted emergency water restrictions in 2017, but according to the San Jose Mercury News, Californians in general are not voluntarily conserving like they used to and are heading back to pre-Drought usage patterns.

The February 2019 total rainfall of 3.91 inches helped to cancel the Drought status, which comes in close proximity to another Super Bloom.

Residents, tourists, golf courses, and the environmental-scientific community alike are grateful for the rains this season. The vegetation in the area has increased with regional botanical benefits, contributing to our Super Bloom, along with the viability of our Bighorn sheep and other wildlife in the Park. However, Borregans are solely reliant upon the groundwater pumped from our aquifer for all of our agricultural, recreational, and municipal needs.

Still, good news is good news, especially coming as it does with the release of the Draft GSP, our guidebook for sustainable groundwater planning and use for the next 20 years. Drought-related water restrictions will not, thankfully, be applicable for the near term.

As good as the numbers are this season, Mother Nature has a way of doing her job not strictly in line with data from previous years.

There are bumps in the road, sometimes fluctuating wildly in the short term.

Also, future worldwide atmospheric fluctuations, especially those associated with El Niño trends will, as always, play into the seasonal rainfall equation for Borrego.

So enjoy an "official drought-free" Borrego while it lasts, but meanwhile keep conserving water whenever possible, just for practice.