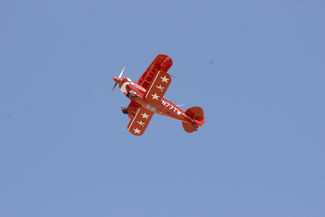 The skies over Borrego Valley Airport were soaring with jaw-dropping excitement April 11-13 for the Hammerhead Roundup, an International Aerobatic Club (IAC) Chapter 36 San Diego Hammerheads' global invite competition. Top aerobatic pilots from as far away as Japan skillfully maneuvered their specialized aircraft to the delight of the skyward neck-stretched observers.

The pilots who outdid their competitors' ailerons, rudder and power adjustments for the least point deductions while climbing, diving, turning and twisting for the judges, lead by Head Judge Michael Church, took the in-category precision flying, and pre-set pattern (see graphic) wins.

"There are two distinct parts involved with competitive aerobatics," Church said, "The flying part, and the competition you're up against. The second part definitely affects the first."

Aerobatic pilots do a little dance of sorts along the taxiway before they go up, where if seen on a public street one would think it's a crazy person in need of their meds (see Howard Kirker photo). But it's actually flight preparation, visualizing every climb and dive and twist and turn in the figures assigned.

This year's competition consisted of 26 men and three women competing in five categories of proficiency.

The two first time contest pilots in the Primary category were both females – Brenda Miko and Brittanee Lincoln.

Miko laughed after her embarrassing first flight. She was so far south of the box that her husband and accompanying safety-pilot, Paul, said, with a smile and a teacher's sensitivity, "She was heading for Mexico."

Miko had technical improvements, including her 45-degree "half Cuban," partially done inverted during a downward roll. Following her 3rd and final flight she exclaimed modestly, "I was just happy I did a little bit better with every flight." Adding, "My aileron roll got better each time." Proudly sharing about her downward spin, "I pushed more to establish the downline. And after coming out of a spin on a vertical dive, I actually saw the center ground marker of the box. I got really excited knowing I was doing it really well this time. It was a huge improvement"!

Fellow newbie Lincoln achieved an excellent 3rd place finish in the Primary category, wondering if her wheat combine machine training back on the farm might have helped. She shared that her dad when comparing her to men who did the same job "He said I was the best." Her competitiveness a strong suit, she finished a mere five percentage points out of 1st place, besting two others in the process (including Miko).

The Hammerhead finale, a 4-minute freestyle with trailing smoke by experienced Unlimited pilots, was a thing of beauty and precision. Last year's winner and crowd favorite, Hiroyasu Endo, was beat by San Diego aerobatic instructor Yuichi Tagagi. Endo did win the Unlimited category, but Tagagi strapped himself into his red Pitts biplane and with music blaring to give onlookers the stunning winner. The highlight being his smoke-churning, lightning-fast "Torque Roll." Asked how many times he actually rolled, Tagagi said, "I stopped counting after seven."

Other top awards went to Patrick Mahon in Primary, Howard Kirker for Intermediate, and Barrett Hines in Advanced.

After the awards banquet, 2nd place finisher in the Sportsman category Magne "Max" Nerheim talked a little trash about the overall category winner, Cade Boeger, "This man has no conscience coming here and beating me...by less than one percentage point for the win"!

In all, these folks sure know how to fly and entertain, but also how to have fun.