Gold Rush Days Bring the Past to Julian 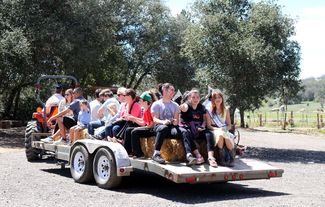 The Julian Gold Rush Days is an event that honors the discovery of gold in Julian, sponsored by the Julian Chamber of Commerce. The event provided visitors with a look into the life of those who lived during gold mining days. Tents were set up around the farm to show how living conditions may have been. Re-enactors dressed in clothes from the era meandered through the grounds greeting visitors and shared stories of soldiers' involvement in the time period.

Visitors had an opportunity to make their own candles, throw a tomahawk, try their skills at archery, gem sluicing, enjoy a hay ride and listen to period music. The highlight of the event was an exciting reenactment by the Society of Civil War Re-enactors.

They demonstrated a skirmish between Civil War soldiers complete with a small calvary and a bugle player.

Cannons were fired and soldiers fired guns upon each other while they each took turns advancing on each other's territory. The crowd was then treated to a detailed demonstration on how the cannon would be primed for firing.

One of the cannons from the reenactment was actually used in the 1960 "The Alamo" film featuring John Wayne.

Food and beverages were available from the Candied Apple Café and Julian Hard Cider. While cheese curds, arts and crafts and square dancing lessons were available to visitors.

Several booths were set up as well from a variety of vendors selling art, crafts, succulents and jewelry. Children of all ages were seen panning for gold and even President Abraham Lincoln made an appearance.

Next time you make your way to Julian, be sure to make check out the variety of events that occur throughout the year. There is so much to enjoy in the small historical town.