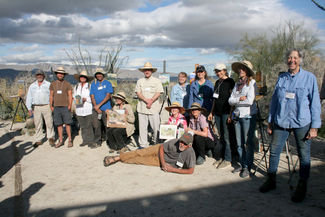 If folks ever wonder how long it takes to paint an oil-based or acrylic work of art, they might consider that Van Gogh finished The Potato Eaters in "many days." But how about 15 invited artists spread out near the Visitors Center up in the Park, and each of them doing a complete painting, called the "Quick Draw" competition, in two hours flat? Timed, of course, under the watchful supervision of Shannon O'Dunn, Borrego Art Institute's Plein Air Invitational Curator out of Boulder, Colorado.

"This is the best Invitational ever," she said of both the artists and their works.

The Plein Air Invitational, now in its 13th year, was a week-long forum for a select group of 15 painters who could pick a spot in our desert, then quickly and efficiently put brush to paint to canvas. The completed works went up on display that same day for BAI visitors to see, admire, and purchase.

By just looking at the works, if one didn't know beforehand, one wouldn't have guessed it took less than a day to complete; they are full works in every detail. Many of the artists this year, several familiar faces among them from Invitational years prior, painted two per day.

Danny Griego out of San Diego chose as his Quick Draw subject, a desert suburban theme and another of his similar-themed paintings later earned him the First Place Best in Show ribbon in the Invitational, his third year at the event.

It was landscape artist Bill Cramer's first trip to Borrego. I found him at the Quick Draw competition "toning" his canvas with a wash of oil-based paint, looking north occasionally to the distant Santa Rosa Mountains, billowing clouds above casting shadows amidst sunny mountain slopes. He was being careful to adjust the angle of his canvas to be away from direct sunlight. An affable and unpretentious artist from Prescott, Arizona, Cramer wasted no time setting brush to canvas and defining the painting's boundaries and line of sight, even as we spoke briefly. Cramer ended up winning the Quick Draw with his "Beginning, Middle, and End" piece, as well as being given the Artists Award for his "Body of Work" by the other artists.

At the BAI Gala, singer/guitarist Dan Crandall Smith set the tone on the patio for incoming guests with his sonorous baritone voice and acoustic guitar, including exquisite renditions of Bob Dylan's "Knockin' on Heaven's Door" and Don McLean's "Vincent" (aka Starry Starry Night, which it was). In this, his first visit to our desert community, Smith commented later, "The discovery of Borrego Springs, with its extraordinary beauty and warm, authentic citizens has been the highlight of my trip west from Virginia this winter."

Inside BAI, Kesling's Kitchen put out a wonderful selection of appetizers that, along with the wine selection, allowed for simultaneous artwork browsing, wine sipping, and art-based conversation by a packed gallery of fine art fans and artists alike.

Goldberg summed up his art experience in Borrego, "The versatile landscape and dramatic light made painting particularly fun this week." With regard to his fellow Invitational competitors, Goldberg added, "The artists were both the best group that I've painted with and the most friendly and fun to be around." His enthusiasm was infectious.

The Second Place Award went to Aaron Schuerr for his colorful clouds passing over the vanishing point of a dirt road running thru a green field spotted with wildflowers.

Danny Griego took the Best in Show First Prize with his "El Rancho #8," another of his dramatic and colorful desert suburban pieces. Commenting on his Borrego experience, "Most of the paintings were executed within a one mile radius of (BAI). I hope my paintings can make people slow down and contemplate scenes that we rapidly pass each day. Urban beauty is everywhere. I am truly humbled to have received the best of show honor. Thank you Borrego Springs for giving me another dose of inspiration!"

With this year's Invitational clearly being the best ever, evidenced by not only Curator and Artists' claims but also the number of red stickers on the paintings indicating "Sold," next year's invitees will have their work cut out for them to surpass this year's talent. The gauntlet has been laid, so 2020 artists, sharpen your track shoe spikes for next year's daily artistic sprints to the finish line.