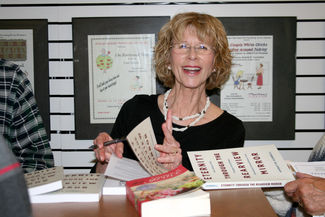 When it comes to seven "Warrior Women" fighting for their causes, writer/performer Annette Hubbell brought to life their unique, often gut-wrenching stories of both the fight and the small victories even one person can accomplish, even if the issue hasn't yet been completely done away with.

All the women portrayed by Hubbell are self-described as having a spiritual calling. But they had at least one more thing in common not touched upon by Hubbell: The issues they were tackling were all previously put in place and continued in force as part of the culture by men in power, be they issues of slavery, prison reform, child prostitution, or true evils of the Nazi regime during World War II.

To Hubbell's telling, the divine revelations of wrong-headed national behavior were transmitted to these warrior women only after the practices were firmly institutionalized, by men. Where was God back at the first instance? Hubbell's characters are vocal on a range of personal issues, but silent on that question.

Despite some of the "first cause" questions of either divine help or a personal moral compass, the women portrayed by Hubbell truly paved the way for both sexes to carry the torch of humanity for humanity's sake. They helped win several battles previously thought to be impossible, and Hubbell brings those internally generated battles to life on stage.

Full article in April 4 issue of the Borrego Sun.