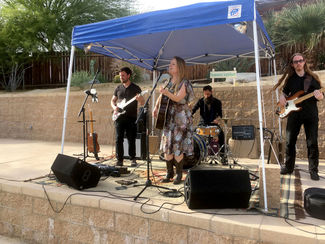 ALICE Walker performs at a Spring concert, free to the public, at the Dreamweaver Amphitheater.

Memorable music and lyrics inspired by a real event should first perk up the ears, then bury itself deep into the soul. Such was the case with Alice Wallace's Santa Ana Winds, her words and music stoking up the tragic imagery of our recent California wildfires. Brought up from subconscious memories, you could see the orange glow and feel the hot, ember-laden wind in the opening lyrics:

Out on the horizon, there's a wicked orange glow;

One man sprays the rooftop...with a garden hose.

Couldn't save the horses

So they had to let them go;

And the Santa Ana winds, they just blow.

This and other songs were off her new album "Into the Blue" dropped in January.

A very large outdoor crowd, numbering perhaps 250 – 300 very appreciative folks in lawn chairs, golf carts, seated on the sloped lawns, and some dancing, heard a mix of selections, both original and covered during Wallace's late-afternoon concert of rhythm & blues and country-western stylings.

The venue was the Springs at Borrego's Dreamweaver Amphitheater. The event, free to the public, was graciously sponsored by the Borrego Springs Community Concert Association (BSCCA).

With her sweet vocals, mid-range to soprano, and playing acoustic guitar (with great backup by the band), Wallace's style and range was reminiscent of some of the greats – Linda Ronstadt, Bonnie Raitt, and Janis Joplin. In 2017, Wallace, based in Los Angeles, was named Female Vocalist of the Year at the California Country Awards.

And then there was the yodeling. Yes, almost a lost art, but not to Wallace in the here and now. She also performed it in one of her set pieces back at the 2016 Borrego Days Festival. "There's not nearly enough yodeling going on," she joked to the crowd.

Another crowd favorite was Echo Canyon, a Wallace original, again inspired by her personal experience, and once again it included yodeling. "Did it sound like coyotes?" she asked in jest. No, it didn't. The soft yodeling sections were beautifully understated bridges to her chorus lyrics, supplemented with the band's fine electric and bass guitar riffs. It was, at least to this reviewer, the perfect amount of yodeling in a song.

The BSCCA survives on donations (includes membership and tickets for the 2019 – 2020 season sold out). Give them a call at 760-440-5117 or fill out a Contact Form on their website: http://www.borregoconcerts.org/tickets.htm.