Down to the Wire at the de Anza Classic 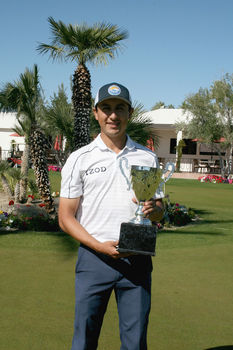 While few were watching, Mark Anguiano out of Whittier, CA shot an amazing 3rd and final round 64 at the de Anza Clasic (Golden State Tour) to overcome a six-stroke deficit, pulled even at 16 under par with second day leader Brady Calkins from La Quinta after 54 holes (while shooting the lowest round of the 81 starting field of golfers), and win the tourney in a playoff that lasted all of one long hole, the par-5 17th.

In the final round of 24 players at or below 5-under par, while most of the three-dozen viewers in the "cart gallery" followed Day-2 leaders Calkins and Corey Pereira, Anguiano was quietly scoring 9 birdies in relative obscurity in the final round. Eyes were closely focused on local favorite Damien Telles, who had seven birdies on Day-1 and was in contention, but he ended the tourney tied for 18th at 10-under.

Calkins played very well in the first two rounds (65-65, birdies galore), but faltered on the second hole in round-3 with a double bogey (a tree ate his drive and he had to return to the tee box, with ensuing stroke and distance penalties).

He made up for it five holes later on #7 with a booming drive of at least 350 yards on the longest hole on the course, a 570-yard par-5, followed by a long and true iron shot that ran up the green past the pin and onto the fringe. He sank the long and breaking downhill putt for eagle, and the gallery erupted.

While Calkins maintained a lead on Pereira (five birdies and three bogeys) for most of the final round, the combination of double bogey, eagle, and two birdies 71 just wasn't good enough to hold on for the outright win. He needed to birdie both of the last two holes, and he birdied #17 but parred #18 and went to the playoff with Anguiano.

The 26-year old Anguiano turned pro in 2014, and although not exactly burning up the circuit, he expressed some degree of understated joy in his win (and a $7,000 purse) at the de Anza Classic. When asked his best moment out on the course, he didn't hesitate: "Five straight birdies," he said with a bright smile. Yes, he birdied two par-5s and three par-4's. In a row. Nine birdies? In one round?!

Anguiano seemed more animated about making the cut in an upcoming Web.com event in Louisiana, and another to follow. The Web.com series is the stepping stone to the top-tier pro tour. He did, however, have a big smile while holding the trophy.

After trophy photos, Anguiano made it a point to accompany Club pro Lyle Archer and thank de Anza Club co-owner Tom Heathcott for his hospitality. Some of the players stayed in the homes of Club residents, saving money on hotel and restaurant bills. Every little bit helps.