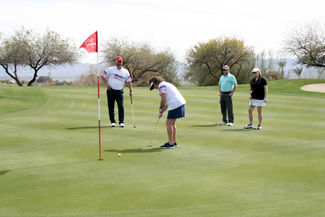 DANNA Dempsey putts to save par to help her team members Gator Longworth and Marc & Linda Vallas win the tournament by a single stroke.

On just another beautiful afternoon in Borrego (in between the rainy and windy ones), American Legion Post #853 held the final golf fundraiser in Borrego for the 2019 season at the Borrego Springs Resort, and the 45-player event, together with a dinner/raffle/live auction event, raised nearly $6,000 dollars for the American Legion Veteran Charities program. The Legion sponsors scholarships plus aid and assistance to families of vets.

Event host and Post 853 First Vice President Gator Longworth, together with key support from Danna Dempsy, past President of the American Legion Auxiliary, and Post 853 member Bob Scribner, all pulled together for a successful fundraiser and dinner. Many of the players and non-player dinner guests were affiliated with American Legion in towns and communities within greater San Diego.

Out on the course, with 45 players in a Scramble format using the best ball of four players/team all the way to the hole, the difference between first and fourth place was fractionally less than two strokes net. In golf, and just like with the pros, every stroke counts.

The winning team of Gator, Dempsey, and Linda & Marc Vallas shot four under par for an impressive 56.9 net.

Decimals were in play because the second place team of Clint Brandin, Artie Aviles, Brian Beebe, and Tom Kapella shot a net 57.6, less than one stroke shy of the winning score. Finishing a whisker behind in third place was the team of Lonnie & Randy Budd and Carol & Dick Nason shooting a net 58. Rounding out the top teeams were fourth place finishers Marla & Dale Smith, Mariann Prassel, and Jim Goble shooting a net 58.6. That's what you call a close match.

Gator's foursome started the match on a Par-4 using one of the lady's drives, and then struggled to reach the green in three. But Danna Dempsey stepped up and sank a fast, 6-foot downhill putt to save par. A single additional bogey in the round, all other conditions remaining the same, would have knocked them out of first place The team donated their winnings back to the American Legion fund for vets.

Awards for accuracy were also given out; Randy Budd for the men and Linda Vallas for the ladies won closest to the pin, and Rod Struck won for straightest drive.

That evening at the Legion post, dinner was followed by what Scribner called "a great raffle!" and live auction. There were lots of small items donated for the raffle, the most important of which was, as always, that most-coveted slab of fudge from the Fudge Factory, followed in no particular order by T-shirts and hats, food gift certificates, and even a Peruvian statute, plus much more. The little things do add up when it comes to donated items and services.

Big ticket items bringing in welcome cash during the live auction included an Overland bus tour, golf outings at three courses – The Springs at Borrego, de Anza Country Club, and Rams Hill – an airplane ride over Borrego in a Cessna, top-tier gift baskets, and even a glass eagle. The raffle and auction items brought in a considerable amount of revenue as part of the nearly $6K total.

The American Legion golf fundraiser was the third such event for the 2019 season in Borrego, coming after those for BASIC, the Senior Center, and the Boys and Girls Club.

Longworth summarized the experience of going with the flow: "Everyone appeared to have a great time, so I think we may need to commit to holding one next year."

With their goal of helping our vets and their families, we'll all look forward to supporting them in 2020.