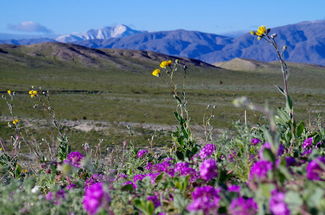 The bloom season will likely be extended thanks to the Valentine's Day rainfall of 2.86" so says Kate Harper, Desert Research Botanist. This should trigger a third wave of germination, more species of flowers than the rain that fell in the first week of December. The first bloom has just peaked with the next wave starting in a few weeks.

"We are likely to delight in two extended waves of a flower-filled desert this 2018 – 19 season," Harper said.

At the moment, the bloom is taking place east of Borrego Springs in the Borrego Badlands along the S22 near the roadside, washes and canyons between mile 33 and 35. There is a large pullout between miles 30 and 31 with room for parking near a field of purple sand verbena. At mile marker 31 along S22 to the left, is a sweeping south-facing sandy area brimming with color and blooms. There are blooms of lupine, dune evening primrose, verbena and some other species. These are all species we would expect to see four to six weeks from now.

Around the Borrego Valley, a major bloom has not yet started, but with the recent rain, it is most likely to start in early to mid-March. In the lower part of Coyote Canyon, there is a localized bloom, but the road is currently closed to vehicles due to flooding from recent rains, people can park on DiGiorgio Road and walk in. Most roads in the Borrego Badlands require four-wheel drive.

There was widespread and significant flash flooding through Coyote Canyon, that went through the flower fields, past Henderson Canyon road, past the Borrego dump and into the Borrego sink. But that was at most perhaps a 100-foot wide swath of flooding. While that undoubtedly removed some flower seedlings, it also probably will insure that those areas will get prolonged growth.

"I'm not a botanist, but it's likely just more good news for the plants. But no one exactly knows what it's going to look like in March, you could have loads of White-lined sphinx moth caterpillars, or a sudden heat wave combined with high winds that could put a damper on the bloom," Rood said