Revving Up Dirt and Talent at TDS 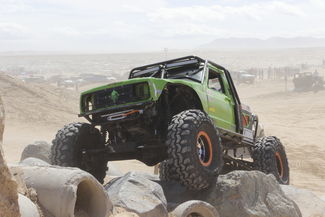 Kicking off the month of March, just a few miles past a small field of desert sand verbenas and desert sunflowers making their appearance for the highly anticipated Super Bloom. Off the S2, with dirt and lots of it, covering the road and swirling in the sky.

The amount of dirt in the air made it hard to breathe, but that didn't stop many from enjoying another year of over 50,000 off-roaders from all over the country showing off for the three-day annual event.

The 57th annual Tierra Del Sol Desert Safari at Ocotillo Wells State Vehicular Recreation Area aka Truckhaven was yet again an event you shouldn't have missed.

Tierra Del Sol is the host of TDS Desert Safari, the longest running off-road event in the nation, and one of Southern California's largest not-for-profit family oriented 4x4 clubs incorporated in 1962.

Unless you haven't been to TDS already, you were well prepared and were ready to take home fair amounts of dirt with the wind not being anyone's friend.

With all the chaos, the incredible talents and style of the many off-roaders who spend months, even years preparing for an event like this.

Partially buried and angled concrete pipes were set up for the less experienced, while a steep grade stood lonely in the middle of Truckhaven, as it seemed many didn't want to even attempt it and possibly be embarrassed.

One visitor said he has only seen one person do it in the last six years he's been to this event. There are probably more, but who knows.

A crowd favorite, one who everyone seemed to follow, was the owner of the vehicle dubbed as the "Green Goblin."

The Green Goblin made its way over the "1,000 Dollar Hill," which had a diamond shape sign, indicating it as one of the most difficult obstacles.

The 1,000 Dollar Hill consisted of at least six large concrete tubular pipes and rocks, where many riders weren't successful, unless with the right rigged vehicle and driving talent of course.

But the Green Goblin, with a few minor setbacks, went over the course easily.

However, its follower, a smaller buggie with wheels bigger than the vehicle itself, traversed it insanely fast without a problem.

Not too far away from the hill were moderate-leveled ditch obstacles for experienced drivers.

Crowds gathered to see if the Green Goblin would be able to go through the closely tight ditch. With help from a crowd member and the cheering encouragment, he made it through, suffering a couple of flat tires and a loss of a couple of parts.

Another 4x4 attempted the same obstacle, but had to stop right at the beginning, after something caused his fuel tank to rupture.

Many had attempts at the obstacles throughout the grounds, some getting stuck and retiring. However, that didn't take away the excitement and fun over the weekend.

If one hasn't experienced this event, there's always next year, prepare yourself by bringing a pair of goggles, sunglasses, a ton of sunscreen, be ready for the sand, dust, and an awesome experience.