A Small But Enthusiastic Crowd at Carnivale 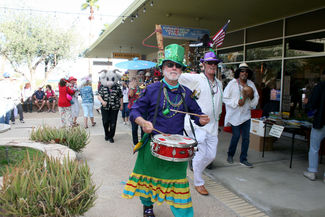 MALL owner Jim Wermers leads the conga line in his "toned down" costume, with drum and Bourbon Street music booming throughout the Mall.

Mall owner Jim Wermers led the band/music and the conga line around the Mall March 2, much to the enjoyment of both participants and spectators.

"I had to tone down my costume this year," he joked. No one else toned their costume down, so he fit right in, including a plethora of nuns in fetching costumes to promote the upcoming BSPAC spectacle, "Nunsense: The Mega-Musical."

This year's event, organized by Linda Stanley, offered "a community event, suitable for the entire family," to tourists and residents alike. The two other yearly events at the Mall include Halloween and Christmas celebrations.

A free table was provided to Mall merchants wanting outside interaction; free books were made available to adults and kids; Jasper Blue showed off his Indian arrows, arrowhead jewelry, necklaces, and his "bullet shell casing jewelry; a "toss-a-large-and-bottom-heavy-object-into-a-very-small-bucket" raised a bit of money from passers-by; all could inspect progress on the individual panels making up a fabulous new ceramic mural by local artists to be mounted on the south side of Kesling's Kitchen later this month; and Kendall's Café and Carmelita's were open for inside or patio dining.

And for the ladies, it was, of course, all about the hats.