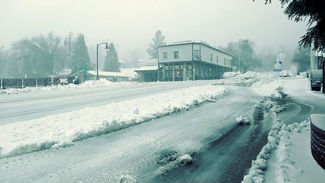 The backcountry of Julian was hit with a blanket of snow, totaling more than 15 inches.

Julian was one of the many areas, which included Mount Laguna, Palomar Mountain and Pine Valley, that received snowfall during the week's storm in mid-February.

The National Weather Service issued a winter storm warning which remained in effect from Feb. 22 until Feb. 25, causing roads to and from Julian to be closed.

On Feb. 23, the California Highway Patrol temporarily shut down State Route 79 from mile-post 5.5 to State Road 78 in Julian, which lasted about five hours before opening SR-79 with no restrictions. However, road conditions were still icy and drivers were told to proceed with extreme caution.

The roads closed again Feb. 24, and all drivers in the area were required to have tire chains, after snow continued to fall overnight. A series of accidents on the road to Julian slowed traffic around 6 p.m., but there were no reports of serious injuries.

A week after the snowstorm, many San Diegans and locals in and around Julian were able to enjoy the snow-packed mountains to enjoy the winter wonderland fun.

Borrego didn't get any snowfall during the storm, but did receive an excessive amount of rainfall. Though, snow fell in the Ranchita area, and through mile marker nine on Montezuma Valley Road. Chains were required to get through that area due to the icy conditions until Feb. 23.