The Comical Magic of Michael Budd 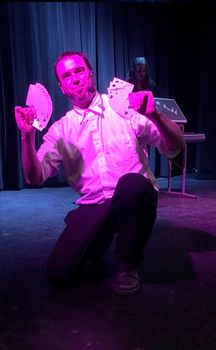 The art of physical misdirection is a staple for most successful magicians. Look over there (but not here 'cause I'm switching something).

However, another form of misdirection in magician Michael Budd's bag of tricks, much more subtle and more difficult to pull off, is misdirection via humor.

Budd pulled off humorous misdirection flawlessly Feb. 23 during his performance in front of a sold-out house at the Borrego Springs Performing Arts Center.

We all love to have our eyeballs tricked by magicians, but tricking our sense of humor is truly a thing to remember and appreciate. In moments of Budd's unique self-deprecating humor on stage, you're laughing very hard at one of his sound bites, or what seems an apparent blunder, like when he seemingly gives the trick away, thinking you've "got it." But it's a false sense of personal satisfaction, because then comes the moment of the "true reveal," the physical trick itself, and in combination with the humor it's a thing of high awesomeness.

Michael Budd has been a magician for over 20 years, and his parents, Lonnie & Randy Budd, are snow birds with a home at the RoadRunner Club. The day after his BSPAC performance, Budd did a second, more intimate and shorter show at the RRC Clubhouse, and it was there in "warm up" mode, standing just a few feet away across a table and using two rubber bands, that his close-up magic wowed everyone. He did it amidst plenty of squinty-eyed skeptics, all eventually laughing at his unique brand of magic-based humor.

As but one example of Budd's tricks, he passed one rubber band through another, like magic, held tight between the fingers of Mike McCalvy the table. Budd's father, Randy, stood watching, and Mom wasn't far away. The rubber band trick was even more astonishing than a magician locking and unlocking two large brass rings from far away, because it was so close to our eyes, and then again in slow motion. No way could he do that!

Yes, way, Michael Budd, so thanks for a great show, and for your unique misdirection-based humor.