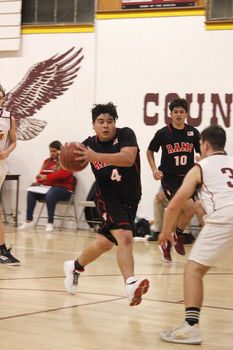 It was quite the thriller for the Rams basketball team against crosstown rivals the Julian Eagles Jan. 25. It was a back-and-forth emotional rollercoaster, down to the wire, intense game that no one could sit still for, especially in overtime, as both crowds could not contain themselves.

With two seconds left in overtime, the Julian Eagles were up by three after a made free throw, but it was still not enough time for the Rams to get a shot off, and lost a close one, 64 – 61.

"Definitely not the outcome we hoped for. Julian is always a tough team to play especially when they play at home," head coach Mauricio Polanco said. "They are able to use their home court to their advantage, hats off to coach Munson who did a great job on getting his kids ready for a big game."

This was also the Eagles first win of the season.

With a floater by junior center Andres Reyes, the Rams were on the board first, who then took an early 7 – 3 lead. The Eagles managed to get in a free throw and a floater of their own before the first quarter ended, but the Rams were still up one, 7 – 6.

The Rams got the second quarter started with a shot by Reyes, but was answered back with back-to-back shots by the Eagles, who took a 10 – 9 lead.

The Eagles managed to outscore the Rams in the second quarter, connecting with the basket continuously, as they led 27 – 22, heading into halftime.

Two minutes into the third quarter, the Rams tied the game up at 27 with a floater and shot behind the arc.

With the clock ticking to end the third quarter, it was a back-and-forth game with both teams making trips to the free throw line, and the Rams not going down without a fight. However, the Eagles still held on to a one-point lead, 39 – 38, heading into the fourth.

In the fourth quarter, it was down to key defense and solid execution of the offense. It was nit and grit, and with less than 30 seconds remaining in regulation, the Rams were holding on to a two-point lead. A basket and a missed foul by the Eagles, the game was tied at 57. The Rams could not get a shot to win the game, forcing overtime.

In overtime, senior power forward Victor Arias sank in two free throws and Alcaraz with the layup put the Rams up 61 – 57.

However, the lead slipped away, as the Eagles broke down the Rams' defense, and put up shot-after-shot, eventually, taking the win.

Compared to the first time these two teams faced off, Polanco said the score was well-balanced.

"I believe that that was the highest scoring game for both teams. We had two players in double figures in points, and four other players with six points or more," he said.

"Julian had four players in double figures and one had six points. To me I believe that was the difference in the game, last game they only had one player in double figures with everyone else scoring in single digits."

The team also faced the Scots at Vincent Memorial, which took place after print.

The Rams are back in action Friday Feb. 8 against the Wildcats of Warner Springs in the last home game of the regular season, which is also senior night.

"As we look to the end of the season, we want our seniors, four of them, to have plenty of time to be out on the court and compete as this will be for most of them the last time they play organized basketball," Polanco said.

"At the same time, I would love to be able to have my younger players have some time to go in and get a feel for the game at the higher level, since I will have only one returning starter next year.