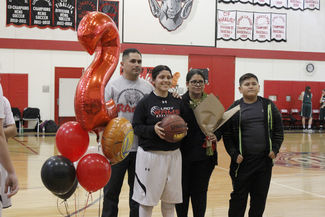 No, it wasn't exactly the best way to end the 2018 – 19 season, but that doesn't define the season the girls basketball team has had. With lots of growth and a learning experience for all, leaves room for a better year next season.

The Lady Rams attempted a late comeback in the fourth quarter, but it was not enough, as the Warner Springs Lady Wildcats bested them on senior night, Feb. 8, 41 – 28.

"It's bittersweet as the end of the season always is. I mean, we have to say goodbye to one of the players who has been such an interval part of our program for four years," head coach Justine Smiley said. "Its been a long season, so it's nice to have it come to a close eventually, and as a home game in front of our crowd. I wish the outcome was different, but it is what it is, that's sports."

The team also played Vincent Memorial earlier in the week, and lost 68 – 33.

Against Warner Springs, the Lady Rams were on the board first with back-to-back layups from sophomore point guard Marla Manzano and junior forward Delaney Barclay, 4 – 0.

Midway through the first quarter, the Lady Wildcats were back in it with a jumper and a free throw, cutting the Lady Rams lead to just one, 4 – 3.

But it was a low-scoring first quarter, as both teams committed turnovers, and were not able to connect much with the basket. However, the Lady Wildcats led 7 – 6, a lead in which they did not give up throughout the game.

The Lady Wildcats began the second quarter on the board with back-to-back shots to extend their lead, and outscored the Lady Rams 13 – 5.

The only shots by the Lady Rams came from free throws by senior point guard Vanessa Rodarte and a steal for a layup by Manzano.

Smiley shared a few kind words for her senior, followed by Rodarte who thanked everyone in attendance.

"My han solo senior. She's fantastic, always been the hardest worker in the room. I know I can always count on her to do anything that I need some support with," Smiley said. "She basically runs practice when I'm not here.

She leads the team by example, doesn't get hot headed, she knows how to keep her composure. Vanessa is definitely going to be missed next year."

In the third, the Lady Rams could not get a shot up until the last minute, as it was a highly dominated quarter by the Lady Wildcats once again.

The Lady Rams trailed 31 – 13 heading into the fourth.

In the fourth quarter, the Lady Rams were finally clicking with the basket.

Barclay managed to get a shot up as the shot clock expired, with seven minutes left to go in the quarter.

Midway through the fourth, down 34 – 17, Manzano had a steal for a fast break layup to begin the Lady Rams attempted comeback.

Manzano later sank in two free throws, followed by a jumper from Barclay, and a shot behind the arc from Rodarte. This was the only three-pointer by the Lady Rams in the game.

The Lady Rams found themselves just down eight points with less than two minutes to go.

However, the Lady Wildcats managed to take advantage of the clock, and stepped up their defense to prevent the comeback, resulting in the Lady Rams falling short.