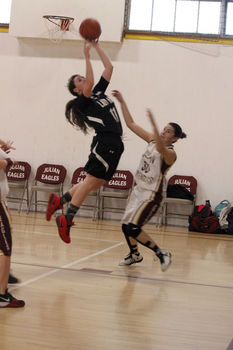 It was a completely different game compared to the last time these two teams met in December.

The Lady Eagles of crosstown rival Julian sure did their homework before facing the Lady Rams basketball team again, and were on the winning end this time, with a 37 – 34 victory, Jan. 25.

This was also a sweet moment for the Lady Eagles, especially in front of their home crowd, as this was their first win of the season.

Against the Lady Eagles, the Lady Rams were up on the board first, scoring an easy four points with six minutes on the clock, 4 – 0.

The Lady Eagles quickly answered them with back-to-back shots, and the game was tied up at 4. It was a low scoring first, as the Lady Rams led, 7 – 5.

In the second, the game remained close as both teams continued to exchange layups and free throws.

Two free throws by senior point guard Vanessa Rodarte and a jumper by junior forward Delaney Barclay gave the Lady Rams the lead again, before it was tied up at 15, heading into halftime.

The Lady Eagles put up back-to-back shots to take a 19 – 15 lead in the third quarter. Midway through the third, both teams continued to go back-and-forth, but the game remained tied.

Midway through the fourth, and the game tied at 30 thanks to a layup by Barclay, it was a fight for the lead. Two free throws by the Lady Eagles put them ahead, but freshman point guard Marla Manzano found her shot, a wide-open jumper on the right to once again tie it up.

Then two minutes later, Barclay put up a layup after a steal, putting Borrego up, 34 – 32, but was tied up just seconds later.

A three-pointer by the Lady Eagles with 1:19 left in the quarter gave them the lead, 37 – 34. Unfortunately, the Lady Rams could not find a rhythm going in the last minute to put up a shot and take the lead for the win, resulting in the loss.

The team is back in action Friday Feb. 8 at home in their final home game of the regular season against the Warner Springs Lady Wildcats at 4:30 p.m.