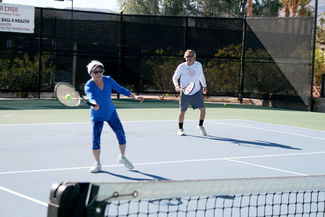 There is a difference between the guy over on the courts who can give you a few tips on your tennis game, and an "Elite Professional" teaching pro.

To be in that category, one has exams to pass: Written, stroke analysis, and on-court. Borregans are fortunate to have one Elite Pro in residence at La Casa del Zorro, Mike Rogers, who also teaches pickle ball, and Geoff Griffin who visits frequently from the Balboa Tennis Club.

In addition to his teaching duties, Griffin heads up the Wounded Warriors tennis program in San Diego.

Rogers and Griffin are both USTA Elite Professional teaching pros, and they gave a demonstration of their skills in a doubles demonstration at LCDZ on Feb 6.

Prior to the demo, LCDZ's Elite Pro Rogers ran drills with his students from Borrego, while Griffin drilled his students from San Diego, both pros working their charges on behind-the-baseline forehands and backhands, overheads, and even defending against an opponent's dink shots.

For the doubles demo, Rogers teamed up with Lee Woldt, and Griffin with Rebecca Labog. It was a beautiful sight out on the courts to see players in action who could actually keep the ball in play – chasing wide shots and returning fast or tricky volleys close to the net – with far fewer unforced errors than one is used to seeing.

Credit the "Elites" for that.