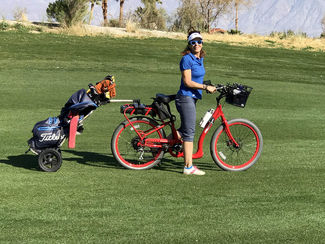 It wasn't exactly like playing amidst conditions resembling the Polar Vortex on the first day of the three-day competition for the Borrego Cup, but according to most of the club players from Rams Hill, de Anza Country Club, and the Borrego Springs Resort, it sure seemed close up at Rams Hill – cold and windy.

But the Rams Hill team managed to squeak out a nine-point win to claim the Cup from previous three-in-a-row winner, Borrego Springs Resort.

High scores are usually not what players seek, but in the Stableford format, high scores on each hole are the objective: A net score of one point for bogey, two for par, three for birdie, and four for eagle.

On Day-1, Tom Pantich of Rams Hill, despite weather conditions, scored 39, the highest of all players. At de Anza the next day, and playing under much more favorable conditions, Pantich had just come out of the water.

Perhaps all he needed was a snowstorm to get back two strokes and overtake de Anza, in the lead by one stroke after Day 2.

Also out on the Resort course on Day 3 were Resort's Dave Cramer and Bob Harrel. Both scored high the last day, in the mid-40s, and Harrell was kind enough to not be camera shy when I took my one and only shot-sequence of him sinking what looked to be a difficult downhill, right-fading birdie from about 30 feet.

The teams finished the tournament with a fine lunch prepared by Chef Kurt Hauser. When Rams Hill was announced the winner, by nine points over the Resort, Co-Captain Glen Clark proudly received the 2019 Borrego Cup for his winning team.

But considering the circumstances, we'll call it a Rams Hill-Mike Miller win.