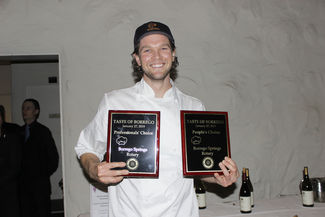 Deciding what you want to eat is difficult, especially when you're trying to weight out which one is better than the other. So how does one judge the best of the best? From the juicy garlic butter shrimp, Asian-style sweet and sour pork, Cuban-style Medianoche slider, sous vide pork belly with butternut squash, cilantro and pomegranate, or yellowtail poke? Answer is, you don't, and leave that hard job up to the professional judges.

Other participants included 2018 Judge's Choice winner The Arches at Borrego Springs Resort, Carlee's, El Borrego, Carmelita's, de Anza Country Club, and 2018 People's Choice winner La Casa Del Zorro, all with offering many dishes that are not specifically on the menu. After that night, it seems their delicious creations just might be.

Kesling's Kitchen also provided special appetizers for guests at the table, serving "Bites on a Board." Many of the ingredients came courtesy of BAI's ArtFarm with ArtFarm Crudites with Saffron Aioli, Grilled wild shrimp with ArtFarm chimchurri and house made bread twists with everything bagel spice and marinated cheeses.

Judge's for the night were two chef's from Sysco Foods, who subsidized the food costs for the restaurants, a wine specialist and certified sommelier, and an executive chef at The Sheraton Harbor Island Hotel, who is also a Borrego High School alumni.

Thanking and welcoming all for their attendance and support of Taste of Borrego was incoming Rotary President Dick Norquist, before passing the microphone over to the night's host.

Once again highlighting the event, the ever so clever and witty Martha Deichler as the night's "professional" auctioneer and host, keeping everyone focused on the festivities and entertaining the crowd with a mouthful of jokes and hilarious side comments.

Deichler thanked the crowd and reminded everyone of last year's fundraising efforts – the much-needed big yellow school bus for the Borrego Springs Unified School District, and the kitchen at the new library.

At Taste of Borrego alone, they were able to raise approximately $40,000 for the school bus. In that time, the money was raised, which was matched by the BSUSD. The $25,000 goal of the kitchen for the library was also raised.

Auction items ranged from a La Casa Del Zorro package, the ever so coveted fly-fishing in Idaho, a photography session with Garett Wood, and a new item, a at-home chef dinner with Kurt Hauser.

Hauser, who is now at the Arches at Borrego Springs Resort, shared that this would be a "world-class experience," in which he and his crew will do all the cooking at your home, and even better, clean up the kitchen. That prize went for a whopping $1,500. The bidding brought in over $10,975.

Deichler continued to mention she had a theory that every man in Borrego has a one syllable name, and rightfully so, many of the auction and raffle winners were just that. How funny.

As everyone continued to enjoy the delicious choices of food from the many participating restaurants, Deichler went back-and-forth with the auction and raffle prizes, with the help of Rotary Club members and 2018 – 19 Miss Borrego Dennise Cecena, along with first princess Camila Hernandez and second princess Gabriela Rocha.

"This was the best Taste to date! Auction & raffle sales were just a bit higher than last year but the big difference was in ticket sales. The ballroom at La Casa was totally sold out at 168 seats. That means the most to us because it shows that the word is out, The Taste is the best party of the season," Rotary Club Secretary Donna Nourse said.

"Once again, Rotary is so proud of the fabulous food that all the restaurants bring to this event. It really shows the diversity and creativity of these talented chefs. Our community is fortunate to have them and Rotary is thrilled that they come back year after year with such enthusiasm."