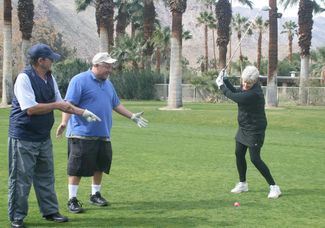 What began with Jenny & Bill Wright and Phyllis & Dan Slade 30 years ago as a celebration of desert art and our environment called the Circle of Art (at Christmas Circle, hence the name), their BASIC concept (Basic Assistance to Students in the Community) emerged in 1992, and the kids in the Borrego community have benefited ever since.

So this year's BASIC fundraiser, held on Feb. 15 at the de Anza Country Club, was all about raising as much money as possible: Early cash donations, hole sponsors, golf fees (the Sun sponsored mine), dinner for those not playing golf, a silent auction, a live auction, and a cash-raising paddle auction. All together, the event raised a whopping $42,000. Martha Deichler said, "amazing, we only thought we'd raise $20 – $30,000."

"The results were beyond my wildest expectations," says event chair Kate Anderson, "So thanks to everyone for helping the kids."

That evening, the real fun began. After a salad and chicken dinner by Chef Vincent Cavalli, and an abundance of wine to get the bidding juices flowing, Deichler took center stage. "Saint" Martha is a title already spoken for, but she is a close second to no one when it comes to squeezing money out of bidders.

But if Deichler is already booked for an event, consider BSHS head football coach/athletic director/math teacher Tim White, who amazed everyone as he transitioned into rapid-fire and very professional auctioneer-speak while driving the bidding up on a painting, "Sheraton Marina," by his father, present at the event.

Curtiss Abbott had the winning bid of $4,500 for a fly-fishing getaway in Idaho. He would be taking his friend sitting next to him, who was curiously driving up the bidding. It was clearly not a strategy for saving money.

But this was a BASIC charity event, so it turned into a typical Deichler bidding frenzy, pushing two guys into a numbered bid-paddle war, coughing up more and more money to out-bid the other while looking to have some fun next summer.

Anderson had a lot of help pulling this logistically difficult event together, and it's success is due to a combination of generosity by de Anza Club owners Linda and Tom Heathcott, a lot of hard work by Joanne Ingwall, Marcia Knutt, Robin Jen Yyck, and Lyle Archer.