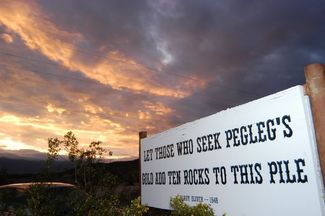 It's true! After 43 years of aiming for April Fools Day, Borrego's famed Pegleg Smith Liars Contest has moved to the first Saturday in March – March 2, 2019.

The only rules are to keep the lies under five minutes (unless you're really good at it) and that the stories have to somehow involve "Pegleg" Smith, the differently-abled 19th century prospector who claimed to have found (and lost) a fortune in gold somewhere out on the vast California Desert.

The Pegleg Smith Liars Contest was first held in 1949. It was the brainchild of the late Harry Oliver. The contest continued until the early 1960s, and was revived in 1975 under the leadership of Diana Lindsay and an informal group known as CACTI (the Committee to Accumulate Curious Tales of Incredibility).

Truth is, there was a real Pegleg Smith. Thomas L. Smith (1801-1866) roamed the deserts of the Southwest in the 1830s, '40s, and '50s, searching for a fabulous lode of black-stained gold that he claimed he once found but could never quite find again. His stories about his lost bonanza grew and grew; one contemporary judged him, "the most superlative liar that ever honored California with his presence." Some folks are still searching for Pegleg's lost gold to this very day. Others are equally convinced it was all a bunch of hooey.

It was Harry Oliver – an Academy Award nominated art director and 1920s Borrego homesteader – who first decided to bring the Pegleg legend to Borrego. He launched the Liars Contest in 1949, along with Ray Hetherington, who ran the rock shop at Knott's Berry Farm. The early contests also featured an Pegleg Trek, with participants spreading out over the desert to hunt Pegleg's lost gold.

The Liars Contest was only one of Oliver's many schemes, which included hiding fake wooden peglegs around desert water holes. According to Oliver, prospectors "seem to figure it's easier to find a mine someone else has lost, than to find one no one ever found, so most of them are huntin' for the mysterious lost ones, that's been talked about so much."

He did his work so well that in 1960 an official California State Historical Landmark plaque in honor of Pegleg Smith was erected in the valley.

"This is the happiest moment of my life," Oliver told the crowd gathered for the dedication. "I have a lump in my throat so big it will take at least three bourbons to wash it down."

All contestants receive certificates and genuine recycled trophies. There are both youth and adult divisions in this family-friendly event. Judges award points for originality, costumes, delivery, audience reaction, and most importantly, including Pegleg Smith and his lost gold in the presentation. Most anything goes – skits and songs are always welcomed.

The Pegleg Smith Liars Contest is free to the public, and prospective prevaricators are encouraged to sign up to spin their tales. Everyone else should bring a chair. The contest begins at dusk at the Borrego Springs American Legion Post, 4515 Borrego Springs Road.