Julian Theater Co. Back For A New Season 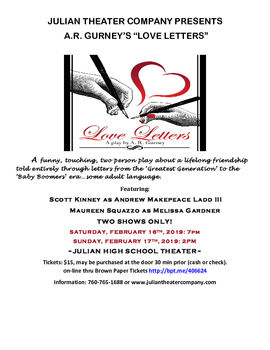 Following a very successful run of "A Christmas Carol" in 2018, the Julian Theater Company will continue to offer Live Theatre, Free Movies, Children's Theater Workshops and more in 2019 in the 'Little Theatre' at Julian High School.

A.R. Gurney's highly acclaimed and widely produced play, 'Love Letters' is a story of a man and a women told through letters to each other spanning a lifetime, from the 'Greatest Generation' to the 'Baby Boomers' era.

The story of their bittersweet relationship gradually unfolds from what is written (and what is left unsaid) in their letters. Both funny and moving it is a theatrical valentine, truly one from and for the heart.

"Love Letters" has entertained audiences throughout the United States and around the world. The most recent National Tour starred Ali McGraw and Ryan O'Neil. * Some adult language.