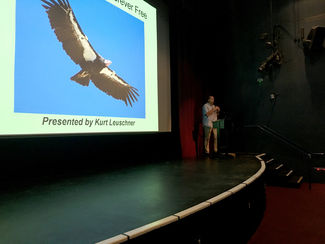 If you're in the right place at the right time, and Borrego could be that place someday, you will see a magnificent bird, the California Condor, with a 10-foot wingspan in flight overhead.

Or perhaps on the ground eating something very dead. Yes, almost poetic. But unless there's a microphone attached to the Condor (in the same family as turkey vultures), and you pick up the sound of wind over its wings while cruising at an altitude of 500 feet, or the sound of carrion-gulping, you won't hear a sound. Despite the fact that filmmakers dub in the sound of a red-tailed hawk whenever they want Condor-in-flight sounds, it is a silent bird – no chirps or squeaks or squawks, ever.

This and other info comes courtesy of Kurt Leuschner, ornithologist, naturalist, and Professor of Natural Resources at the College of the Desert, during his lecture at BSPAC on Jan. 25.

If Hal Cohen is The Hawk Guy, Leuschner is definitely positioned to be The Condor Guy.

The California Condor was driven almost to extinction by the use of the insecticide DDT. At the top of the food chain, Condors ingested enough DDT-carrying food to cause their eggshells to be very thin, and cracked or broke up easily.

But now the Condors are making a great comeback, says Leuschner, thanks in part to a much-criticized at the time but eventually correct decision by the U.S. Dept. of Fish & Wildlife in 1982 to capture all the 22 remaining Condors for breeding.

That number, 22, frightfully small, did not ensure a stable breeding population. The good news is that Fish & Wildlife released them into the wild, together with captured Andean Condors, starting in 1992, and now there are 500 - 200 in the wild and 300 in the captive breeding program.

The bad news is that we lost 19 Condors in the past 11 years due to the toxic effects of hunting ammunition – lead poisoning. To curtail more losses, a steel shot-only law signed by former California Governor Jerry Brown goes into effect this coming July.

So, there's hope for the future. Professor Leuschner also says that with an ever-increasing Condor population, now restricted to certain areas in the Southwest, the Condors could, considering their vast cruising/soaring range in flight, eventually reach our region.

That's right, someday you (or your kids or grand children) might be lucky enough to catch a Condor over Borrego.

Enjoy the view because it won't make a sound.