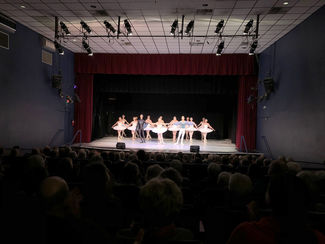 The City Ballet of San Diego came to BSPAC on Feb. 8 and put on their usual great performance, stressing grace, strength, body tone, and artistic expression. And the new theatre sound system was excellent.

The dancers started by using the second act of Swan Lake, showing off their artistic and athletic talents. There were swans, pairs and triplets of swans, and finally eight of them in a very beautiful display of costuming. Both male and female costuming was very pleasing to the eye.

What was surprising was to see it all from the front row, where facial expressions told all – how to make very difficult moves, turns, and lifts all seem effortless, and all the while making sure that the men had firm grips on the ladies while doing twirling and lifting maneuvers. Given the pace of the dances, one slip could spell disaster.

The highlight for many was the Pas de Deux by Sumire Ito and Lucas Ataide to close out Act I. Both dancers were in visually striking costumes and performing some spectacular moves, artistically and physically challenging to say the least.

Act II consisted mostly of dances for each month of the year, and each dancer, alone or in combination, performed in spectacular fashion.

Ballet is an interpretive thing, and without knowing the story behind a particular dance, it's difficult to make the leap from what's seen and exactly what's being interpreted. But even not knowing the story behind the dance, it's clear that the City Ballet dancers gave the audience a true sense of what artistic beauty combined with athleticism looks like on stage in Borrego.