Tennis, Pickleball and Eggnog for Christmas 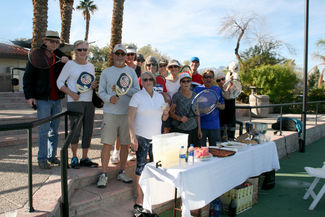 What better way to celebrate the Christmas season in Borrego than by playing a round of tennis or pickleball with fellow enthusiasts, followed by snacks, prizes, and an eggnog option – either regular or "enhanced." There was good reason for the enhanced eggnog to follow, not precede, the "Tennis and Pickleball Eggnog Social" at the La Casa del Zorro courts on Dec. 23 – it packed more punch than an overhead smash at the net.

A dozen Borregans and visitors, all good players, enjoyed an afternoon of exercise, followed by snacks, beverages, and even prizes at the La Casa del Zorro courts, hosted by local USTA Teaching & Resort Pro Mike Rogers and his lovely assistant, Renate Nishio.

I did not try out Rogers' tennis or pickleball racquets but, since this article would not to be written up until after Christmas, did sample Renate's enhanced version of the eggnog. Truth be told, two samples. OK, two large samples. But I forget whatever happened after that.