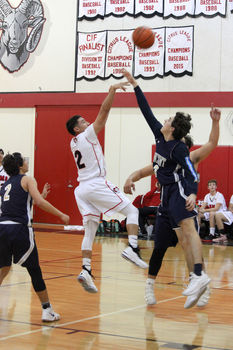 Despite starting the first quarter off with much intensity and aggressiveness, and keeping the score close, the Rams basketball team could not hold a lead over the Scots, and lost 68 – 37, Jan. 17 at home.

"It's hard when you come off a big loss like that, but they still managed to play hard a little bit, but in the first quarter we couldn't keep up with them," head coach Mauricio Polanco said. "We couldn't keep up the tempo once they started pressing us, we kind of lost our heads."

The team also played the Red Hawks of Mountain Empire Jan. 15 at home after a two-week break, and lost 69 – 49.

The Scots of Vincent Memorial were on the board first with a three-pointer, 3 – 0.

The Rams answered back with a shot by junior center Andres Reyes.

With 2:54 left in the first, senior guard Alexys Padilla sank in a shot behind the arc to tie the game 8 – 8.

Unfortunately, that would be the closest the Rams would get, as the Scots made sure to stay in the lead.

The Scots put up four consecutive shots to extend their lead 17 –8 to end the first.

The Rams started off the second quarter with a hot hand.

Senior point guard Fernando Alcaraz put up a rebound, followed by a layup and a free throw by Reyes, but the Rams were down, 17 – 13.

Midway through the second, the Scots found themselves connecting with the basket quite often, and managed to shut the Rams down, holding them two free throws, 35 – 15.

Just like the second quarter, the Rams started the third quarter quickly on the board, with two free throws by senior power forward Victor Arias and a layup by senior guard Juan Carmona.

In the fourth, the Rams were once again shut out, being held to just seven points, and dropped the game.

Polanco hopes as they go further into league, they will focus on having better passes and protecting the ball better.

To keep the team mentally focused, he said is a challenge.

"It's always tough at this age and you watch the NBA, where they're taking half court shots, and they think they can do the same thing obviously without practicing or anything," he said. "It's always a task, but we just have to keep at 'em, keep reminding them to practice how they play, and play how they practice, not the other way around, and cut off the stuff they actually do and watch on TV. They all can't be Steph Curry."

The team also faced the Wildcats at Warner Springs, which took place after print.

The Rams are back in action in an away game against crosstown rivals Julian Friday Jan. 25 at 6:30 p.m.