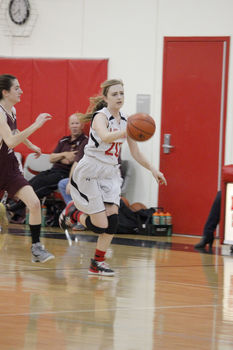 With a lot of steals for fast breaks and connecting to the basket each time, it was no surprise for the Lady Rams to seal the win.

"I'm excited to have the first league win under our belt, especially before hitting our two-week break because that's always a weird transition coming back," head coach Justine Smiley said. "We've been working a lot on our ball control, and moving the ball around, instead of just one or two passes then heading to the basket. They did that really well tonight."

Sophomore point guard Marla Manzano got the Lady Rams on the board with a jumper and shot behind the arc to put them up, 5 – 0 early in the first quarter. Then back-to-back steals for layups extended their lead 11 – 0.

With 1:48 left on the clock, the Lady Eagles were on the board after a layup to stop the bleeding.

A buzzer-beater by senior guard Vanessa Rodarte from outside the arc, ending the quarter, 13 – 2.

The Lady Rams started the second quarter where they left off, and were on the board right away, with multiple shots by Manzano, Rodarte, sophomore center Laurynn Strate and junior forward Delaney Barclay.

Manzano finished the game with 28 points.

The third quarter was all Lady Rams, as they shut out the Lady Eagles, scoring 11 unanswered points to extend their lead, 37 – 4.

In the fourth, the Lady Eagles shot a jumper with less than two minutes left to go, but it was evident the Lady Rams had sealed the game from the start.

Smiley stressed ball movement and the importance of the young core for key games in league.

The team is back in action 5 p.m. Friday Jan. 11 against the Lady Wildcats at West Shores.

Heading into league play for the second half of the season, Smiley wants to see more offense from more of the players.

"We have very dominant guards, which is amazing, but down the stretch, a good team that can pick up on that can shut you down easily because you stop one or two players, so I want to increase our depth," she said. "I want all of our girls to be able to handle themselves on the court so that each one of them is just as dominant and a threat."