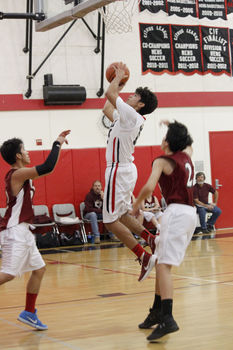 It was a back-and-forth battle since the tip off, but the Rams basketball team managed to close it out in the fourth quarter, to seal their first league win against cross town rivals Julian Eagles, 44 – 34.

It was a close one, with both teams battling it out quite aggressively, but still not losing their heads.

"It's been a couple of years since we have been able to beat Julian, so it feels really good to actually beat them here at home," head coach Mauricio Polanco said. "They're a really tough opponent, our rivals, so it's good to have this win. Our first league win."

In the first quarter, both teams answered each other back, shot after shot. The Eagles took back the lead quick to begin the second quarter.

The Rams regained the lead, after senior guard Alexys Padilla sank in a step back shot behind the arc, 11 – 9.

Again, like the first quarter, both teams battled it out on each end of the court, but the Rams seemed to have the offensive edge. Layup after layup, and even a three-pointer that just continued to bounce a few times before going in, gave the Rams a 23 – 15 lead, heading into the half.

The Eagles began to kick up the momentum, and were much more aggressive in the third quarter, but the Rams held the lead, 31 – 26.

In the fourth, senior power forward Victor Arias sank in two free throws, but was answered back with a three-pointer from the Eagles.

With 5:40 on the clock, senior guard Juan Carmona, senior point guard Fernando Alcaraz and Arias found their way toward the basket to extend the lead.

However, the Eagles were not going down without a fight, and were chipping away at the Rams' lead.

The last two minutes of the game had everyone at the edge of their seats. With a free throw and a layup, cut the deficit to five, 39 – 34.

But the defense made sure that would be the closest they would get, and the offense added to the score.

The team shut it down, and got their first win of league.

However, the win was not a pretty one, and Polanco said there are many things to work on, including fundamentals.

"We have to box out, and our shooting is really horrible right now, but we're still trying to get that rhythm going," he said. "I keep telling them to be much more aggressive, to drive the ball in, force the foul, so I hope we can get better on that."

The team returned from a two-week break and faced the Lions at Horizon Prep, which took place after print.