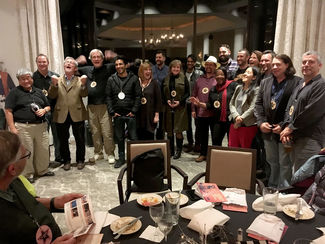 With more films submitted than ever before, Borrego Springs Film Festival Chairman Fred Jee and his committee were able to select only the highest quality films for viewing at the Borrego Spring Performing Arts Center theatre in a sold-out Festival over the Martin Luther King holiday weekend Jan. 17 – 21.

Jee and company cranked up his now well-oiled machine of people and technology that provided Borregans with a range of film genres - animation, short- and full-length features, documentaries, and Latin films at the sixth annual Borrego Springs Film Festival.

Filmmakers from near and far attended the festival, and all expressed appreciation for the opportunity to have their work seen and appreciated in our community. Winners of both the Judges awards and People's Choice were announced at the Awards Dinner at La Casa del Zorro after the Jan. 21 free showing of films.

The Sun will feature some film reviews, along with a summary of the awards ceremony in the Feb. 7 issue.

Below is a summary of the Judges awards for each genre.

Included within the nearly five terabytes of film content (that's 5,000 gigabytes) were the five films that won their genre:

Animation: Bulky Items, a 4-min film directed by Jeff Le Bars and Jeremie Balais, uses top-notch animation and a somewhat quirky analogy between the trend to replace bulky things with more modern and efficient ones that might end up replacing people.

Documentary: Straight from the Pen, a true inspirational ray of societal hope by the director team of Paul and Lori Sutton, revealing a successful exit strategy via a writing class, and the power of self-expression, for those caught up in the prison system.

College students with a criminal justice curriculum assisted these hard-core inmates, and all of the 11 who participated in the film have reformed themselves, and they have not returned to prison.

Narrative Short: Traces, follows the events and emotions by the female lead who states, "I don't know who my dad is." Director Guichart Cecillia explores the woman's mistaken identity of her real father and the emotional journey to address that issue.

Latin: Ainhoa, about a 9-year old who has left home, bringing only her schoolbag and a Playmobil.

It is easy to take for granted the freedoms, certain basic rules of living, we Americans enjoy. But in dismal Romania in 1988 under communist rule by dictator Nicolae Ceausescu (he was later executed by firing squad), food was scarce, the economy was supported by a barter-system to obtain basic necessities of life, and the Communist Party (particularly the secret police) pretty much ruled one's life.

Under that backdrop, director Jesus del Cerro's feature film, "Hawaii," is a masterpiece of storytelling, and is richly deserving of its win for Best Narrative Feature at our sixth annual Borrego Springs Film Festival. Subtitled foreign films can sometimes be a bit too much to take, even story-wise, for more than a few minutes, but not this one, even at nearly two hours long.

The lead character, Andrei, his father, and other other family members all live in a crowded Bucharest apartment. Life is tough, suffocating even, but they have inherited a $3 million estate in Hawaii from Andrei's uncle after the uncle escaped Romania many years prior in a daring escape over the border in a hot-air balloon.

However, if a claim is made on the property in Romania, the government will confiscate it. Andrei's only hope is to get to a neighboring country and lay claim to the property.

The brilliant story structure, combined with well-drawn characters with conflicting wants and needs, twists and turns in both the story and character arcs, and even a budding romance that has more sharp turns than a run down Montezuma Grade, all combine to build up suspense that keeps one's interest at a peak for the entire length of the film. This plus great cinematography give authenticity to place and time to both interior and exterior scenes.

"Hawaii" is a truly remarkable film, and we are fortunate to have a film festival that is growing in stature enough in the U.S. and around the world to have films of this quality submitted for exhibition. "Hawaii" one of those films that could even get a nod when it's Oscar nomination time.

Billie – A heartwarming animated film by Maki Yoshikura about a Labradoodle's trials and tribulations following the death of his owner.

The Craftsman – One of the most humorous of all the film submissions, this 6-minute narrative short by Dominic Arcelin takes bumbling craftsmanship to build a birdhouse to new heights of laughter.

The Voice – a pleasantly unique and extremely well-crafted narrative short by Takeshi Kushida employing shadows and light to depict the fantasy world of a working stiff in a hum-drum job.

Eye For Love Tour – The range of personalities and takes on what makes up the word "love" is on display in this interview-based, take-it-on-the-road documentary by Catherine Cunningham-Huston & Gene Bodzin. Somewhere in this film is a connection for everyone about that elusive emotion.

Tin Can – Anyone afraid of clowns won't see this movie, but the rest of us should.

A rodeo clown is thrown out of work and must resort to entertaining kids, and he takes a risk across the Mexican border that lands him in jail. But the destination is worth the journey in this 20 minute Latino offering by Pat Battistini.

Bride of Frankie – A black & white comedic homage to the Frankenstein classic, trying to match up male and female creations, plays to the funny bone in this narrative short by Devi Snively.

Two Black Coffees – Another black and white entry, this 8-minute narrative short is riveting in the use of not flashbacks, but reverse-motion cinemetography that keeps one on their toes to see if the abused wife can save herself and her lover from her husband.

Jeremy – If you want to see a realistic and heart-wrenching film seemingly shot in the devastation of a middle east war zone, but actually shot in a guy's back yard, this 10-minute Latino offering is one to catch. Getting back home in one piece is only part of the concern.

Fortune – How do you really know you're dead? When people who died call you from an iPhone you just destroyed. Great little narrative short by Anthony Newen.