Cross Rededication: A Symbol of Remembrance of Fallen Warriors, Not Religion 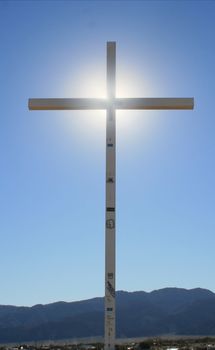 There was and continues to be a good reason for government officials to keep the 1st Amendment of the U.S. Constitution in mind when making decisions about what does and does not constitute a violation of the concept of separation between church and state.

In the case of the "Ocotillo Wells Jim B. Robison Memorial," a simple steel cross, painted white, and erected in 1966 on a low hill on County property just south of the airport and visible from Highway 78, the issue came to a head when someone complained.

Jim Robison was one of over 56,000 American deaths in what became a very unpopular war in Vietnam. The Ocotillo Memorial has, over the 50 years since its erection, served mainly as a symbol of remembrance of his sacrifice, not his or anyone's religion. It is a reminder of sacrifice, not sacraments. As a symbol, the cross and its meaning has also helped heal some of the wounds of a generation of former members of the military who were, to be generous, not very kindly regarded when they came home from Vietnam.

Starting with Robison's family and then moving out to friends and supporters, and later to local political and veterans organization leaders, word got out about the campaign to help save the cross from removal, including over 10,000 signatures on a petition. It took a combined effort to finally put the issue to rest: Our American Legion Post #853 stepped in and purchased the County's quarter-acre parcel upon which the cross now stands.

A re-dedication ceremony on Jan. 2 for the Robison memorial drew over 100 people from all walks of life – Robison's family and nearby residents and residents from Borrego Springs; active and retired military; members of regional veterans groups; a newly elected County Supervisor; and even the National Commander of the American Legion Brett Reistad.

It was a ceremony that began with a full presentation of colors by American Legion Post #853 members; a heartfelt National Anthem performed by Borrego favorite Judy Taylor on vocals and guitar, the audience joining in; and a welcome and introduction by AL Post #853 Commander Rick Dobbins.

Speakers, including Robison's nephew, told of how the memorial cross came to be, following his death in Vietnam. They spoke of the sacrifices made, the after-effects of war, and the need to remember not only this soldier, but the others, as well. Speakers also related stories of how elected officials and disparate organizations rallied to the cause of preserving this memorial. Commander Reistad spoke of the need to remember the basic concept of heroism, selfless patriotism, and Robison's love for his country as well as for his family and home town of Ocotillo Wells.

But it was Nathan Fletcher who managed to eloquently bridge the gap between remembrances of Vietnam-era soldiers and those who served later. Fletcher is a former Marine counterintelligence specialist who did two combat tours in Iraq, the Near East, and the Horn of Africa; he was a professor of political science at UC San Diego; he was a California State Assemblyman; and he is also the newly elected San Diego County Supervisor for the 4th District.

Supervisor Fletcher told the story of his and fellow soldiers' return home from a long combat tour in Iraq. He'd changed planes three or four times, and his plane landed on U.S. soil much later than planned – at 3 a.m.

He did not expect many folks to be there to welcome him home. But when he got off the plane, there they were: A group of Vietnam vets putting out the Welcome Home mat. It's a good bet few of them ever got such a welcome. It's something he, and those listening at the Ocotillo Memorial service, will always remember.

That's what the Ocotillo Wells Jim B. Robison Memorial is really all about – Remembrance.