Tennis Teaching Pro Drills on Volleys at the Net 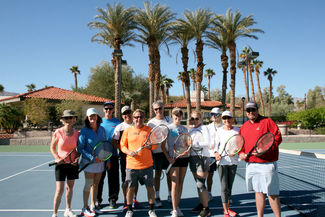 For doubles tennis aficionados who prefer to stand behind the baseline when returning balls, as opposed to the risk of getting face-planted at the net, one of the drills at the clinic held by teaching pro and doubles expert Trent Aaron at La Casa Del Zorro Nov. 12 was on the advantages of acquiring more aggressive close-to-the-net behavior.

Since both can occur close to the net, it's important, says Aaron, for players to get set and be ready for those close-to-the-net balls. Swinging volleys, as opposed to short defensive strokes, can be very effective when done properly. "I'm trying to offer them a new shot, or something they can build on," he says, "like top spin on a power volley" (close to the net) or even merely improving their stance, defensively and offensively.

Trent and LCDZ teaching pro Mike Rogers went toe-to-toe in a short doubles exhibition match that featured net approaches. There was no "score" as such, because players replaced each other in a round-robin format. "A good miss is one into the net," says Trent after the exhibition, as opposed to the tendency to hit long and over the baseline.

"There are some really good players here (at LCDZ)," said Aaron, "and Mike has brought them along very well."