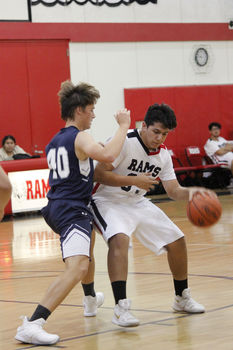 The Borrego Springs Rams basketball team is off to a shaky start this season with a 1 – 7 overall record, however, there is still positivity looming with the team.

Improvements and tweaks are still being made, and head coach Mauricio Polanco is not so worried about the record.

"We have to find a way to gel together and be able to play harder than we have been. With our point guard coming back, he'll facilitate more points for our other guards and our bigs," head coach Mauricio Polanco said. "So as they keep playing together more games together, they'll work better as a whole so it'll be OK."

The team got their first win of the season on the road against St. Joseph Academy, a close 29 – 26 score Dec. 4. Both teams faced off earlier in the season in Borrego, where the Rams fell 39 – 21.

In their most recent game against Horizon Prep Lions at home, the Rams could not keep up, and lost 61 – 33.

"I think we played really well today. They (Horizon Prep) are a very good and well-coached team with a lot of height and speed. But I think our guys did an exceptional job with the tools that we have," Polanco said. "It was our first game for our point guard (Ferny) and he will continue to get better and he had a great game today."

The Rams struggled to get a shot up in the first quarter, being limited to three points, 19 – 3.

Senior point guard Fernando Alcaraz put in a jumper at the free throw line to get things started in the second quarter.

This is Alcaraz's first game of the season, returning from a football season-ending elbow injury.

"I'm hoping we will go into league and be able to win the games we need to win against those opponents. If we play the way we played today, there's no doubt that we can do that," Polanco said.

The team also participated in the Warner Mountain Classic, which took place after print.

The Rams are back in action against crosstown rivals the Julian Eagles Friday Dec. 21 at 5:30 p.m. for their first league game of the season.