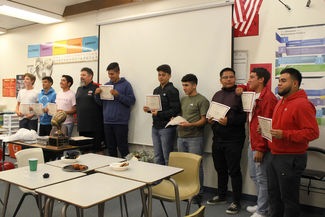 It was a night to relive and celebrate the outstanding season by the Borrego Springs High School football team at the annual awards banquet, but it was also filled with a mix of bittersweet emotions, knowing that it has all come to an end.

Head coach Tim White acknowledged all who attended the banquet, and recognized the hard work put in by the BSHS staff, coaches, players and parents this season.

Ryan Lynn, who has helped with game film, and providing the athletes with the "Fifth Quarter" after game days, presented a slideshow of memorable plays from the season. There were tons of cheers, excitement and laughs, as the players remembered their journey this season, being undefeated and Citrus League champions.

White began the night by recognizing those who lent a helping hand throughout the season behind the scenes – from watering the grass on the field, taking photos or simply just being there. One of the honorees was Andy Macuga, who takes time out of his night on Friday's to not only help coach, but also announce every home game. White said he is a "great ambassador of Borrego," and a thank you to him is simply not enough.

Macuga shared a few words to those present, and was emotional as he was lucky enough to have the chance to see his last freshman class finish their senior season, and accomplish what they did.

White then recognized the parents for their support, and the coaches for all their efforts. He especially recognized team mom Jennifer Morales, who he said "No matter what I needed, she was there. Every time we had a pre-game meal, fruit during the games, contributing and helping with tonight, she has been one of the best mom's, if not, THE best mom's I've ever had in all my year's of coaching, and couldn't have the season without her."

White thanked the parents for allowing him and the coaching staff for putting their trust in them to not just teach them the X's and O's, but teach them about life and help them grow as young adults.

He followed his thank you's to announce the San Diego Section Scholar Football Athlete of the Year, and that honor went to Carlos Meza with a 3.95 GPA. He followed with the San Diego Union-Tribune All-Academic Student Athletes of the Year. This award is given to juniors and seniors with a 3.0 GPA or higher on a 4.0 scale – Fernando Alcaraz, Juan Carmona, Jessica Delgado, Octavio Delgado, Ulices Vilchez, Angel Fergoso, Manuel Fuerte, Carlos Meza, Brian Martinez, Alexys Padilla, Andres Reyes and Ty White were honored.

Prior into going through the All-League awards, White shared that three players earned honorable mention, and they were Fernando Alcaraz, Andres Reyes and Caesar Ochoa.

Ochoa, who is just a freshman, White said that it is a huge honor because he can't recall a time where a freshman was up for honorable mention before.

White said to everyone that next season won't be about "rebuilding," but rather, continuing. He mentioned how great it was for the younger guys to be able to experience the game early, and they will have to be able to fill in the shoes of the departing nine seniors.

The coaches and the players voted on who was the most outstanding players of the season on offense, defense and special teams.

"All the awards are great, but there was one stat that I really cared about, and that was the dub," White said. "To first of all, win this trophy (pointing to the Battle of the Springs trophy), then going undefeated and winning the Citrus League Championship," as he lifted the trophy up, while the team burst into a load roar.

White told the group coming up that there will be many things to learn and improve on for next season, as everyone will be gunning for that championship.

To wrap up the awards, he presented the team with the Citrus League Championship banner.

Despite it not being the banner they ultimately were hoping for, "it is a banner that'll stay up forever, and nobody can take it away from us. It is our legacy," he said.

A special assembly will be held for the hanging of the banner. Time and date to be announced.

It was a great season for the Rams football team, and all are looking forward to next year, as they defend the Citrus League 8-Man title, and for another shot at the CIF League Championship.

Full story with list of awards are in the Nov. 29 issue of the Borrego Sun.